Yesterday as I was dressing and preparing for a day of meetings, it occurred to me that I haven't worked in an office environment in over six years. I have become spoiled by working in my comfortable clothes, often mismatched, and inevitably covered with stains. Wearing make-up and professional clothes felt foreign as if I was a little girl playing dress up.

I spent the day in an office participating in meetings and trying to absorb as much information as possible. By the end of the day, I was worn out, but this fatigue was vaguely familiar. I wasn't tired from chasing Robby or because I stayed up all night writing an insurance appeal. I was exhausted because I spent a day under flickering florescent lights, trying to remain alert while keeping my daydreams from intruding on my attention. (To be honest, I prefer being physically tired from playing with Robby to fatigue stemming from monotony.)

Soon after lunch my leg began to twitch and swell, no doubt the result of being sedentary for so long. When I'm working at home, I often have my feet propped over the arm of my rocking chair or on the couch. Sitting in a standard office chair, without moving around, definitely takes a physical toll.  By the time the work day was done, I had completely slipped out of my socket and was rhythmically kicking my leg trying to keep the swelling in check. My efforts were only moderately successful.


Working from home is not easy, but at this point in my life it has become my definite preference. I don't like being tethered to a building and being told which hours I must work. I like working in comfy clothes without having to worry about my appearance, and I have become adept at scheduling and balancing my various contractual obligations. The hours that I work are erratic, but my self-made schedule suits my needs perfectly. The fact that I can kick off my leg and prop up my limb while working on my couch is a definite bonus!
at 6:12 AM 1 comment:

During the past few years I have been featured in several ads for Ossur's Proprio Foot. Each time I open a magazine and see my image, I feel both a sense of exhilaration and embarrassment. I am not a model by any means, and I am always flattered when my photo is chosen.

I have been fortunate enough to have Robby with me in many of the ads. I am hard on myself and always criticize my own perceived flaws in every photo. However, there can be no denying the fact that the little boy by my side is beyond adorable! Robby is only six, but he has amassed a unique scrapbook filled with a variety of advertisements, fliers, and a catalog cover. What a wonderful keepsake of his childhood.

Typically I am not happy with an advertisement when I first see it because I look at every imperfection.  I am, without a doubt, my worst critic! However, I am featured in a new advertisement that, at the risk of sounding vain, literally left me breathless. I am thrilled with the image and the message. I am proud to be part of this new campaign and the photo that was chosen has become my all-time favorite picture of me and Robby.  What do you think? 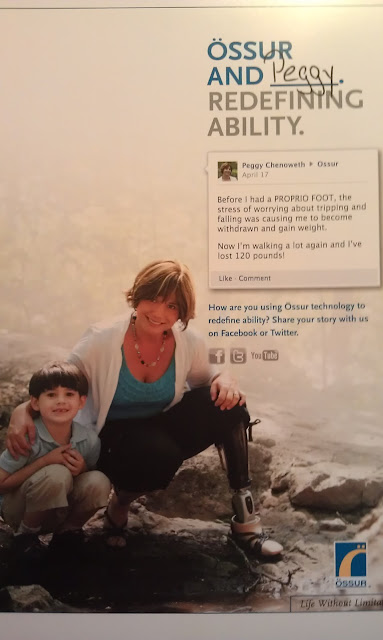 Pardon the poor photo quality, I'm traveling and had to take a photo will my cell phone.  I'll scan the image when I get home.

Greetings from Tennessee! I arrived last night travel-weary but safe. I checked into my hotel room, promptly removed my bra and ordered room service for dinner. I thoroughly enjoyed watching reruns of The Big Bang Theory without interruptions until I fell asleep. I've come to the conclusion that it doesn't take a lot to make me happy!

It took me over eight hours to fly to Tennessee, a distance that I could have covered in my car in about 7. I really need to take more time when booking a flight from now on. I had to drive two hours to an airport to catch a small plane to Dulles Airport which is only 20 minutes from my house. For some inexplicable reason it was nearly $500 cheaper for me to take the extra flight. I fail to understand airline economics.

I'm not a nervous flyer, but I did not enjoy the first leg of this trip. We sat on the tarmac waiting to move only to be informed by the Captain that "the airplane shut off and they are waiting for an external power source to get it started again." The fact that we were, in essence, waiting for the plane to be jumped did not instill a lot of confidence!

After the plane was restarted, we took off on what turned out to be one of the bumpiest flights I've ever experienced. I was surprised by the turbulence because it wasn't raining and didn't appear to be stormy. I felt like I was on a roller coaster and my nausea reminded me that I'm too old to be on dizzying rides. I did make a new friend on the flight. I introduced myself after I instinctively grabbed his thigh and buried my head in his armpit after a particularly violent bump.

Thankfully the second leg of the trip was non-eventful and I didn't end up in a strange man's lap. I arrived safely, retrieved my bag, and took the first available taxi to the hotel. By the time I got here my leg was swollen from all of the traveling, and I had lost motivation to do any exploration. Hopefully I'll be able to do some sight seeing today after my meetings.
at 6:19 AM No comments:

Today I am packing and heading to the airport for a few days of meetings  in Knoxville, Tennessee. Although I'll miss Robby, I have to admit that I'm looking forward to the evenings of solitude and quiet that this trip will afford me. Who would have thought I needed to travel on a business trip to rest?

I have been so busy during the past three weeks that I only know the day by the projects that are looming. Between Robby's party and Scott's annual Student Luncheon, I've cooked and played hostess for over 100 people since Friday. I love my new ovens, but our time apart during the next few days will be welcome respite!

Traveling is always stressful. I know that Robby will cry and it will break my heart. It is some solace to know that his tears immediately dry when he is treated to ice cream after dropping me off at the airport. I know that he will be okay and that the separation is good for both of us, but it is always difficult saying goodbye.

Ever since my TSA nightmare a few years ago, I have become a nervous traveler. I'm not worried about turbulence or the plane crashing. I'm fearful of the incompetent security agent!

I am hoping that I am met with a professional TSA representative when I reach security. I am simply too tired to deal with any conflict right now! Although the official screening procedures for an amputee are straight forward and clear, I never know what I will encounter.  Every airport and seemingly every agent has a different set of procedures and rule book that they are following. Not knowing if my screening will be simple or laboriously long is always a source of stress when I fly!

After saying an emotional goodbye and dealing with security, I'm looking forward to reaching my hotel. The thought of being alone, without anybody needing me to fix something or find a missing toy, feels like Utopia. I'm going to order room service (let somebody else handle the cooking for a change), snuggle under the comforter and assert dominion over the remote control. I am in desperate need of this Mom-cation, even if I had to travel for work to get it!
at 6:18 AM No comments:

My promise of party prep help never quite materialized, so I spent all day Friday cleaning and cooking late into the night. I woke at dawn to clean up the yard after the violent storms that blew through just a few hours earlier. After a few hours the sticks were picked up, the chairs were set out and the pirate flags were hung. Just as I was putting my rake away and wiping the dirt from my leg, the moon bounce and cotton candy machine were delivered. A quick shower and we were party ready!

Our first guests arrived at 1:00, and Robby could not have been happier. Our yard was quickly filled with children running, laughing, and bouncing. Thankfully, the weather cooperated with bright blue skies and warm but not hot temperatures because we ended up hosting nearly 50 people. It was a perfect day!

Towards evening we lit the fire pit, roasted marshmallows, and made s'mores. The adults talked and new friendships were made. Robby and his friends continued bouncing until close to 9:00 when the bounce company came to retrieve their goods.

The day seemed to pass in a blur. I never expected his party to last 8 hours! My little party-goer was utterly exhausted when his bouncing buddies left. We had to carry him into bed and I'm not quite convinced that he was awake when his head hit the pillow.

I quickly followed his lead and went to bed shortly after him, but not before patting myself on the back for a party well-done. I decided to sit down and reflect on the day over a piece of cake. I didn't even feel guilty about the splurge in my diet because, according to the pedometer that I was wearing, I walked over 9 miles in my duties as party hostess!


Sunday morning my sleepy brown eyed boy walked into the living room and curled up on my lap. He gave me a huge bear hug and offered me an unsolicited kiss. He looked up at my and whispered, "Momom, thank you for my party yesterday. It was the bestest day of my whole life, and that's a lot of days because I'm six now." Friday and Saturday were both hectic and exhausting, but knowing how much it was enjoyed by my son made it worth every sleep deprived moment! 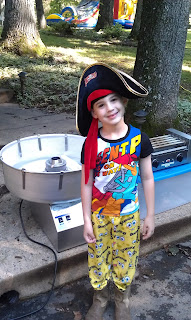 Still in his jammies when the bouncer, cotton candy machine and hot dog cooker were delivered. He did, however, have the sense to put on his pirate hat and cowboy boots before running outside. 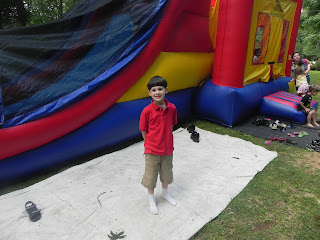 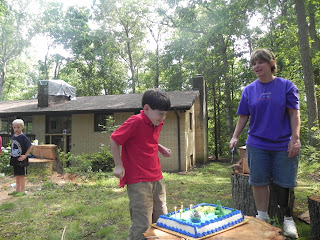 He took his wish very seriously! 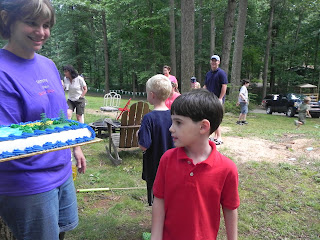 In case you're curious, my shirt says, "Mommy of the Birthday Boy!" 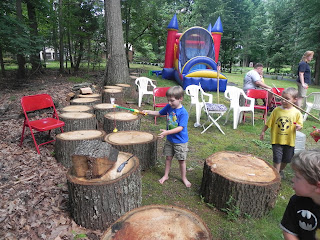 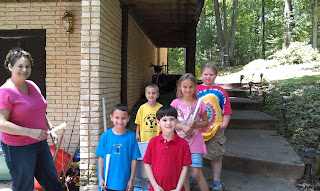 The first go round with the cotton candy. 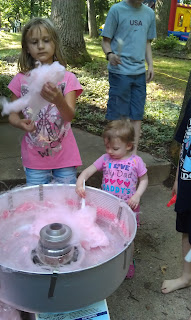 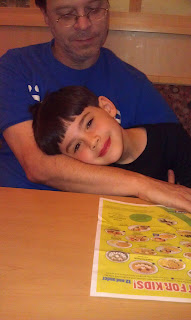 Breakfast Sunday morning. He was so tired he asked us to "feed him like a baby bird" and almost fell asleep!
at 6:18 AM No comments: