In terms of the future of prosthetic care, yesterday the limb loss community was dealt a detrimental blow.

The new version of the American Health Care Act (AHCA), which passed in the House yesterday by one vote, ended the Essential Health Benefits (EHB) as we know them today. Instead of being mandated in all policies, the decision to define EHBs is left to the states. With states having authority over the mandate, prosthetic care will become dependent as much upon geography as it does financial means.

Last night, after the legislation was passed by the House, I kissed my boys goodbye and drove into 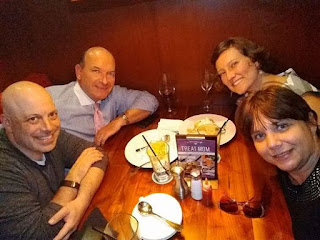 DC. I met Dave, my podcast partner and friend, along with Peter and Ashlie (two highly respected and well-versed advocates in the limb loss community) to discuss the state of prosthetic care and limb loss in this country. Although the passage of the AHCA in its current form was heartbreaking, I felt uplifted being surrounded by such dedicated stewards for the limb loss community.

After driving through DC traffic (in the rain), I finally made it home around 10 pm. It isn't late for most, but considering that my little Hamlet has me up before the sun each morning, I was awake well past my bedtime. As soon as I arrived home I fired up my computer and Dave and I recorded a special edition podcast to break down the legislation and its impact on the limb loss community.

I encourage you to listen to this short podcast, read the show notes and become involved. The fight to maintain EHBs isn't over, and now we must switch our efforts to the Senate. Become involved, because this is everybody's fight.

Don't get me wrong, I am delighted that Robby enjoys Taekwondo. He has grown both emotionally and physically since he was enrolled. We have no doubt that the classes have been good for him and he loves going. In fact he enjoys the classes so much that he now goes three to four times per week.

While Robby is happily readying himself for class each night Scott and I can be found huddled in the kitchen, negotiating who will take him. Actually, it is more like bartering who doesn't  pull class duty that night. It isn't that I mind watching him in class, but  sitting in an uncomfortable straight chair in a foyer has lost its appeal.  Perhaps a more compelling  variable is the fact that when Robby is in class Timmy is in bed sleeping, meaning whomever pulls home duty gets an hour of solitude and control of the television remote. After chasing Hamlet all day, the allure of an hour of quiet feels like a vacation!

Last night I lost the negotiation (for the second time this week) and begrudgingly assumed my place in the foyer of the studio. Robby, although still recovering from his cold, was eager and excited for class. I wasn't feeling fantastic but I tried to appear upbeat.  I didn't want anybody, especially Robby, to know that I wasn't thrilled with being there.

It turns out that I thoroughly enjoyed being a spectator at last night's class. After weeks of practice, Robby finally mastered a difficult skill that has been eluding him. He also gained the confidence to allow the instructor to throw him to the ground. I probably shouldn't admit that part of me thoroughly enjoyed watching him thrown to the mat by the instructor. I knew he was safe of course, but part of me found it uncomfortably satisfying.
For a kid who is terrified of being hurt, it took a great deal of courage for him to volunteer to be thrown upside down on a mat. I might have missed out on the quiet house, but I definitely made out in the deal. I suppose I'll have enough years of a quiet house when the boys grow up and move out.
at 6:41 AM No comments:

After a rough beginning of the week, things are starting to look up. The plague has lifted and, while we don't feel 100%, our routine is returning to normal.  Robby is back at school and Timmy is again content playing with his trains and blocks. My little Timmy becomes extraordinarily needy when he is sick. The fact that he is again allowing me out of his sight was the first indicator that he was feeling better.

In the past two weeks I have quit my job, accepted a new position and nursed everybody in the family back to health. I know that I should be walking on cloud 9, elated with these welcome changes. In reality, I am feeling overwhelmed and would prefer to hide and cry.

Of course, my emotions are probably fatigue induced. Not only does Timmy not let me out of his sight when he doesn't feel well, but he stops sleeping through the night. Getting up at 4 AM for three consecutive mornings has me running on fumes. So, I'm going to stop wallowing and start cleaning. . Whenever I feel like I need to regain control, I start with my house, and in this situation it could certainly benefit from a little attention.
at 7:01 AM No comments:

It feels like the cold plague has descended upon our house. Everybody is sick and feeling miserable. Robby was home from school yesterday with a fever and a nasty cough. Timmy has thoroughly claimed the bottom of two nightgowns and three shirts by mistaking them as a walking Kleenex. I am going to need to put the washer on heavy duty in order to wash those green boogies away. (Ick!)

I'm wasn't sick enough to call a Momom sick day (which basically means that I'm still able to get out of bed) but yesterday I felt miserable. I was exhausted from the moment I woke up. Of course, the fact that I was roused out of bed at 4 by a sick toddler probably contributed greatly to my fatigue. Timmy wasn't sick enough to be slowed down. Rather, he was at the dreaded place where he was frustrated that he didn't feel well but was strong enough to keep running on steam. In other words, he was a boogerie, miserable, frustrated mess. That's not a good combination for anybody, but the trifecta is particularly destructive with a toddler.

Robby spent the day alternating between resting in bed and playing computer games. I spent the day trying to corral a sick little tornado while attempting to avoid being used as a giant tissue. I wasn't successful with either objective. I'm hoping that today is a better, and healthier, day for everybody!
at 6:35 AM No comments:

It's only the the first of May, but this past weekend felt like the middle of summer. On Saturday our temperatures soared to the mid-90's. After having the house heat running earlier in the week, the difference was remarkable. Between the bright sun against the blue skies and the hot temperature, we were all feeling a strong summer vibe.

If our pool had been open, I have no doubt that we would have thrown on our swimsuits and spent the day splishing and splashing. Unfortunately our pool won't open until Memorial Day, so we had to devise a hot weather plan. We headed to the store and picked up a new sprinkler toy and a 10 foot inflatable pool.

Timmy was giddy with anticipation as the pool was being inflated. Despite the water being (bone chilling) cold, he showed no inhibitions about jumping in to play. After standing in the calf high water for about 20 minutes while he splashed around me, I finally garnered the courage to sit down in the pool with him.  Yikes the water was frigid, but I became comfortable after my legs began to numb from the cold.

Playing with Timmy in our little pool reminded me of the times I spent with Robby doing the same thing. Both were eager for me to join the fun and neither was content for me just to watch from the comfort of my porch swing. For some reason, my kids are only happy when I am partly submerged in freezing water on a hot summer day.  Although it wasn't physically comfortable, being with him outside and playing made my heart happy.
;
Getting in and out of a small inflatable pool is difficult enough with one leg, but the experience becomes exponentially more difficult when my back and legs seize up from the cold water.  Thankfully the water has warmed up a bit for which my aging body is grateful. This week the hot temperatures are supposed to continue, so I imagine that we will be spending a considerable time playing in our little pool.