I will always remember August 2015 as a time of both fear and exhilaration. Amputees across the country lived with the looming threat of detrimental changes to medicare which, if implemented, would have eradicated prosthetic care as we know it. I remember shaking as I learned about the LCD as I tried to imagine the state of prosthetic care if it was implemented. I also remember the excitement of rallying the community to help create a movement against it. 100,000 signatures were obtained in a mere 17 days, a feat yet to be repeated by another disability oriented petition.  Everybody from all walks of life and from all facets of the industry worked together to voice opposition to the LCD.

Ultimately the LCD was tabled and the issue was sent to a committee.  At this time the committee is still convened and purportedly working through the issues. Little information has been yielded since the committee was established, and the community continues to watch and wait.

Recently, a bill was introduced in the Senate which would radically change the process Medicare Administrative Contractors (MACs) must go through before adopting a new LCD. S.794, also known as the Local Coverage Determination Clarification Act of 2017, would drastically reform the process for enacting a LCD in the future. From full disclosure of the proposal to requiring the committee to answer concerns raised by the public, this bill would bring transparency to every stage of the process, inviting input from the public at multiple stages in development.

This bi-partisan bill would improve the LCD process, hopefully avoiding the turmoil caused during August of 2015.  We have created sample letters that can be sent to your Senators, urging them to support S.794.  More information about the bill, and about ways to become involved, can be found on our special alert podcast.  I hope that you will consider lending your support to this effort. In my opinion, transparency in government is always a good thing!
at 6:44 AM No comments:

Yesterday was laid back and relaxing. With no real work to do, I was left to entertain myself. I spent the morning deleting scores of photos and screenshots from my computer. Dave and I recorded a quick call to action podcast before packing up Timmy and heading out to meet my friend for lunch. It still feels odd not having any work responsibilities, but I am trying to make the most of this time because I know that I will again be busy when my new position starts.

Timmy was relatively well-behaved during lunch. With the exception of one escape attempt, he stayed seated and happily munched on his chicken and fries while I chatted with my friend. His behavior is far from stellar, but considering that he is newly three and remembering how he has behaved in the past, I can honestly say that he has come a long way. Although I still scan each restaurant to establish my quickest escape route in case of a meltdown, lately he has been trying to behave.

Today I think Timmy and I will head to the farm. I know that he'll love playing on the structures, and bouncing on the jumping pillow. The first few days I struggled with my free time. But you know, I think I could get used to this "not working" lifestyle!
at 5:26 AM No comments:

The past few days have been both liberating and emotionally exhausting. After 5.5 years working social media for an amputee organization, I submitted my resignation on Monday. Leaving something that has been both steady and comfortable is scary, but I am exhilarated about my next professional venture. (More to come when the news is officially released.)

In January I declared 2017 the year that I was going to believe in myself the same way that I believe in others. Leaving my job was an integral step to chasing my dreams and ambitions. Resigning from the position was not easy because I love my amputee community,  and I am passionate about the work that I was doing on their behalf. Every single day for the past 5.5 years I definitively knew that what I was doing was making a difference in somebody's life. I will always be proud of the community pages that I facilitated.

Although I provided two weeks notice, yesterday morning I discovered that I had been stripped of my admin credentials and email access. I was shocked because I had been a faithful and dedicated steward since I started so many years ago. I was hoping to transition out of the position and to professionally end my tenure. The organization opted to move in a different direction. I am frustrated with the lack of closure after so many dedicated years, but thankfully I have this blog to explain my quick departure.

Yesterday I found myself in a novel situation. I had absolutely nothing to do. After working for 1,964 days, I had a day off. At first I felt lost, but quickly decided that staying busy would be the best distraction from the quagmire of my emotions. I packed up Timmy and we headed to the bounce houses. Jumping for two hours with my little guy was the best distraction ever!

Rest assured that, although I have left my position, I remain committed to the community. I am still going to be involved. I will still be facilitating peer networking and offering assistance whenever possible. I will still be advocating and pushing the issues that are impacting the community and I will still be blogging. Dave and I have a list of groundbreaking resources in development. I believe that this change will serve to amplify my efforts for the community.

My title and employer are changing but my passion and commitment remain the same.  My new position starts soon, and I am excited to share this new journey with all of you. I can't wait until I can reveal my news! (Secret keeping has never been my strong suit.)
at 6:04 AM No comments:

Although I know he will not remember, we tried to make Timmy's birthday as special as possible. He thoroughly enjoyed having me sing to him and requested it often. I obliged each time. Not only did I want to make him happy, but I also know that is a matter of time before he realizes that my singing voice is strong in enthusiasm but lacking in range and talent.

We began the day with his favorite breakfast (Chick-fil-A) on our way to drop Robby off at school. Afterwards I took him to a new indoor playground which was readily enjoyed. He took off running without hesitation and climbed the rock wall without batting an eye. My little three year old is fearless!

When he was done running, climbing, sliding and jumping we headed to lunch at McDonalds. (Did I mention that birthdays don't have to be healthy in our house?) He nibbled on some nuggets and then slid and climbed some more in the play area. When he was a complete sweaty mess, we packed up and drove to Robby's school.

Lacking any friends of his own, Robby's classmates were more than happy to fill the void on Timmy's birthday.  They graciously accepted Timmy into their classroom and celebrated his birthday with cupcakes and ice cream cups. I doubt there is anything Timmy loves more than spending time with Robby at his school. He lights up entertaining the "big kids" and relishes the attention.

The rest of the day and evening were spent playing at home, watching cartoons and enjoying his favorite dinner. He seemed to be particularly impressed with his train themed cake, although the fact that it was covered with mini Thomas the Train toys was probably the clincher.  By 6:30 he was exhausted and fell asleep on top of Puppy blanket on the living room floor.

I know he won't remember yesterday, but I will never forget how we spent his 3rd birthday. 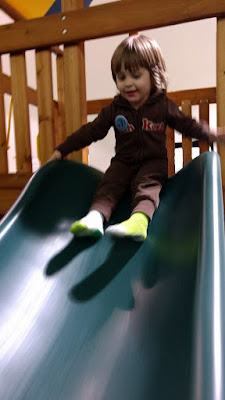 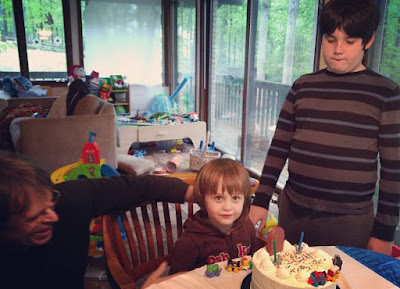 I can't believe you are now three years old. It seems like just yesterday I was apprehensively cradling my tiny little preemie in my arms. Now you are a strong and fearless three year old. My goodness the years have passed quickly.

You have kept us on our toes since from the moment I discovered that I was pregnant with you. You are the definition of a miracle baby. We wanted you for so long and were on the verge of giving up when you announced your presence. Our little family feels complete because you are now here.

Hamlet, you are a silly little boy. Even when you are sick you are happy and smiling. The joy that you have for life is infectious and your giggle is one of the most intoxicating sounds. Everyday being your Momom is an adventure.

I love watching you grow and learn. Your enthusiasm for Thomas the Train, toy planes and little cars makes me smile. Watching you play I can see that you are both smart and clever. I have no doubt that your future is bright!

I hope that you have a wonderful birthday. I'm looking watching my little three year old continue to grow, learn and thrive. But please, don't grow up too fast!
Love,
Momom