Yesterday afternoon I picked up a smiling and happy Robby from school. He chatted all the way home, a rarity these days when he typically grabs my cell phone and starts playing games as soon as he buckles his seat belt. He talked about his friends, their interactions and what they played during recess. Only after I pressed him did he reveal what he did academically.

His jovial demeanor continued through dinner where he regaled his Daddy with the same stories I heard on the way home. When he was done talking about his day, Scott took the opportunity to inquire about his piano lessons. Robby said that they went well, but added that he had a good time in music class today.

"Today in music we all had to take turns making up a song. Miss Olga gave us a tune and we had to come up with words and sing it to everybody. At first I was nervous, but I decided to man up and sing loud and proud."

Of course Scott and I asked for an encore performance. Robby stood up at the table, adjusted his shirt, and loudly sang this little ditty.

Curse you Nana, for the bean soup.
You gave it to my Momom and it makes her toot.
Her toots are really loud.
Her toots go really long.
With a smell that bad it is just wrong.

Sigh. I think we need to revisit the personal information vs. school/ public sharing again.

The wild weather of the past few days has thrown my leg into a tizzy. My leg is constantly aching during the day, not from socket or use but from the inside out. My toes hurt, which considering that those little piggies went to market, leads me to believe that the issue is phantom pain related.  I'm not debilitated by the discomfort, but I am quickly becoming tired and annoyed.

The pain and discomfort is reminiscent of my first year as an amputee. I am beginning to realize that, at least from a nerve perspective, I have regressed. I have been experiencing more phantom sensations since the re-amputation than I have in years, and needless to say I am not happy!

Although I can't say definitively, I have come to realize that this first year after my surgery may mirror my experiences after my initial amputation. While the adjustment to limb loss and a prosthetic were already conquered, physically my body is reacting the same way. My nerves are angry and the phantom pains are flaring up frequently with the intensity increasing by changes in weather.

I wasn't anticipating a flare-up in phantom pains this winter, but I suppose it makes sense. Although I have been an amputee for more than a decade, the bone and nerves have recently been cut. In a way my body thinks that the amputation is new. At least I have one weapon in my arsenal that I didn't have when I was a newbie- now I know how to manage and minimize the pain. I think that my leg massager and heating pad will be getting a work-out in the coming weeks.

Monday night I had a difficult time falling asleep. Lying in bed, tossing and turning, I cursed the fact that I was now middle age. My bones were hurting so much that I couldn't find a comfortable position.

I woke up early on Tuesday to discover the source of my pain. What was predicted as a few possible flurries had formed into a full blown winter storm. We had four inches of beautiful snow blanketing our yard. Soon the calls started coming announcing first a two hour delay and finally a full closure. Both boys expressed their delight upon hearing of the school cancellation by rolling over and falling back to sleep.

After everybody woke up and ate the traditional "No School" breakfast of pancakes and bacon, Robby and I began to plan our snow adventures for the day. I was thrilled (and admittedly a little relieved) that he was eager to include Hamlet in our outdoor fun. After shooting down his suggestion of having a snowball fight, him vs. Timmy, we settled on sledding. We all dressed in our snow clothes and headed outside.

Timmy looked absolutely adorable in his little Snoopy bunting. I suppose that the coat is even more special because it was Robby's. I have photos of my holding Robby wearing the bunting during his first snowstorm. It felt surreal that the scene was now being replayed with a new baby.

After posing for a few pictures, I strapped Timmy into his little sled and Robby took the rope. Reiterating the ban on snowball fights and reminding him to go slow, Robby carefully began to pull his little brother across the driveway. Timmy seemed excited to be outside and part of the action because he was smiling from ear to ear.  I was a little nervous about allowing Robby to pull Timmy, but after awhile I began to relax. Eventually I found myself thankful for his help. Trying to tow the sled only reminded me that I am not yet 100% recovered from the hysterectomy surgery.

Watching Robby and Timmy play in the snow warmed my heart. Timmy's childhood is going to be a completely different experience because of his interactions with his big brother. I am not going to be expected to be his primary (and many times only) playmate. This is a role I am happy to share with Robby. 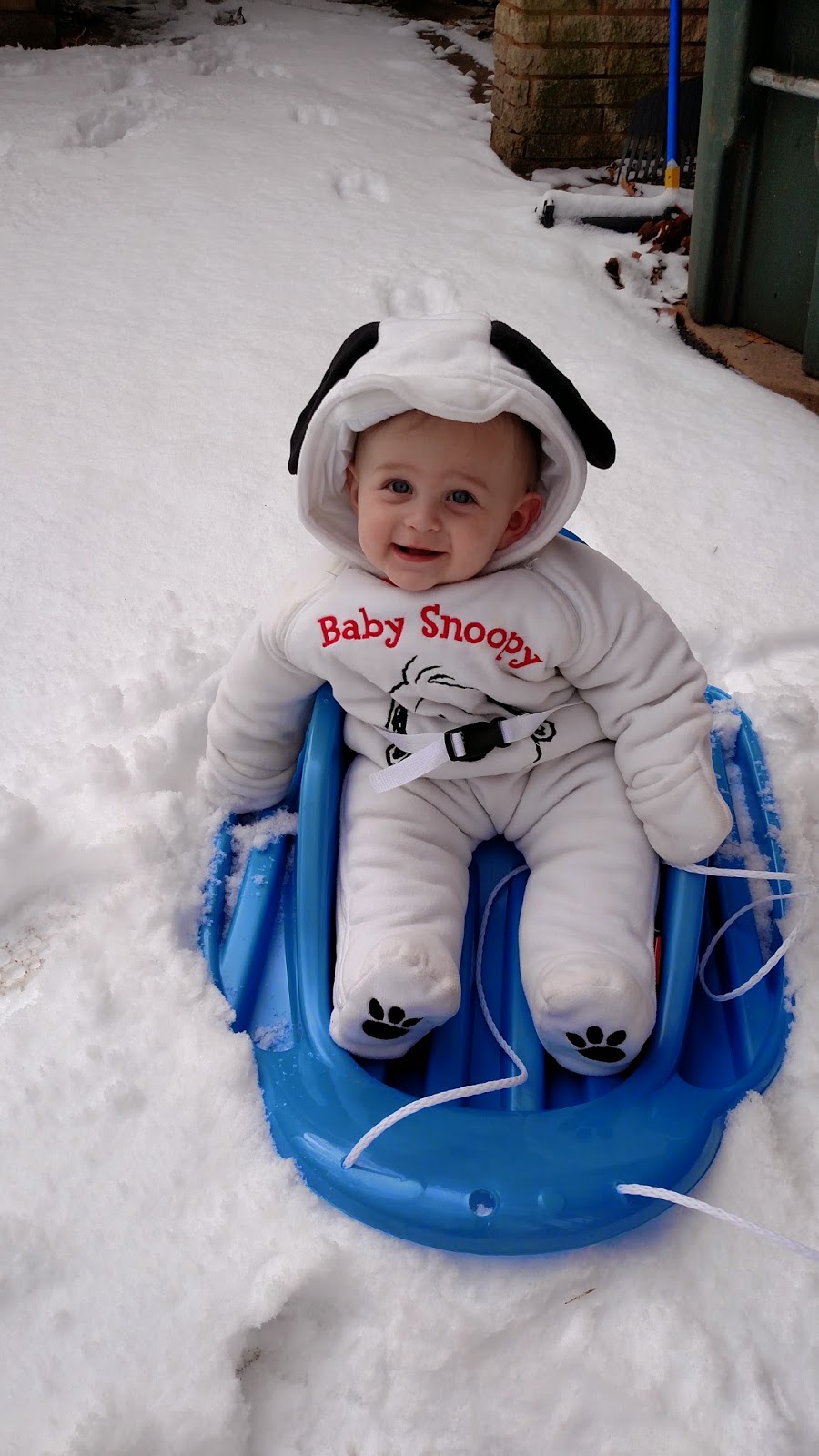 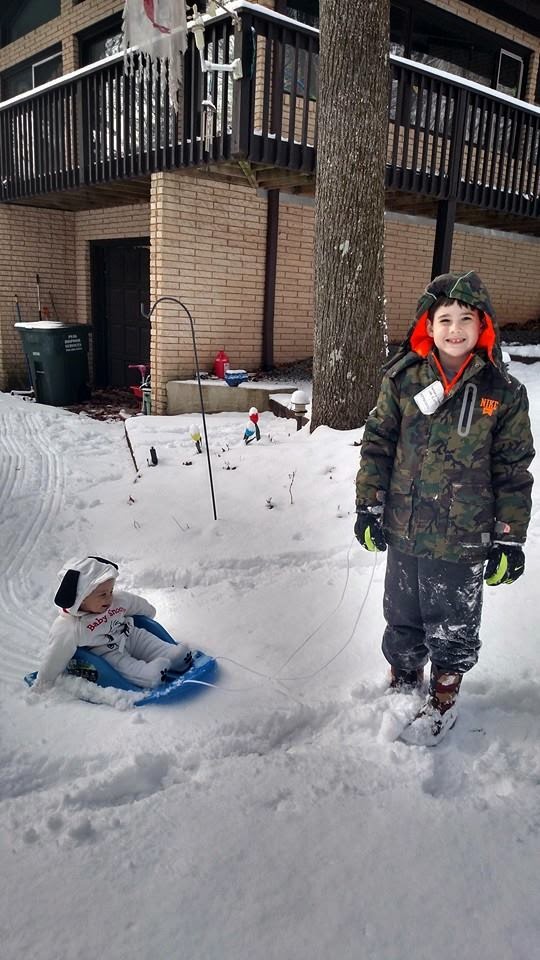 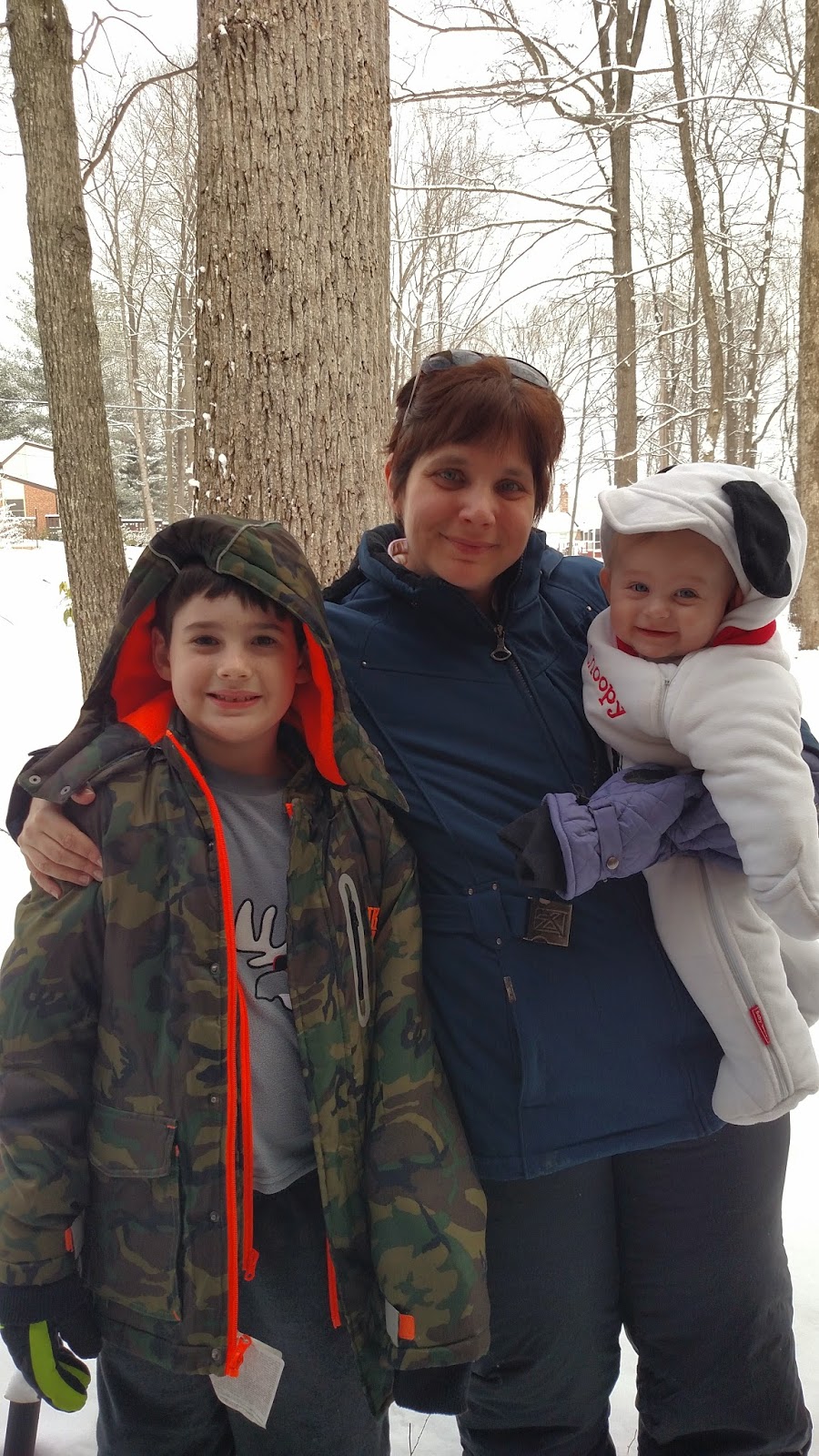 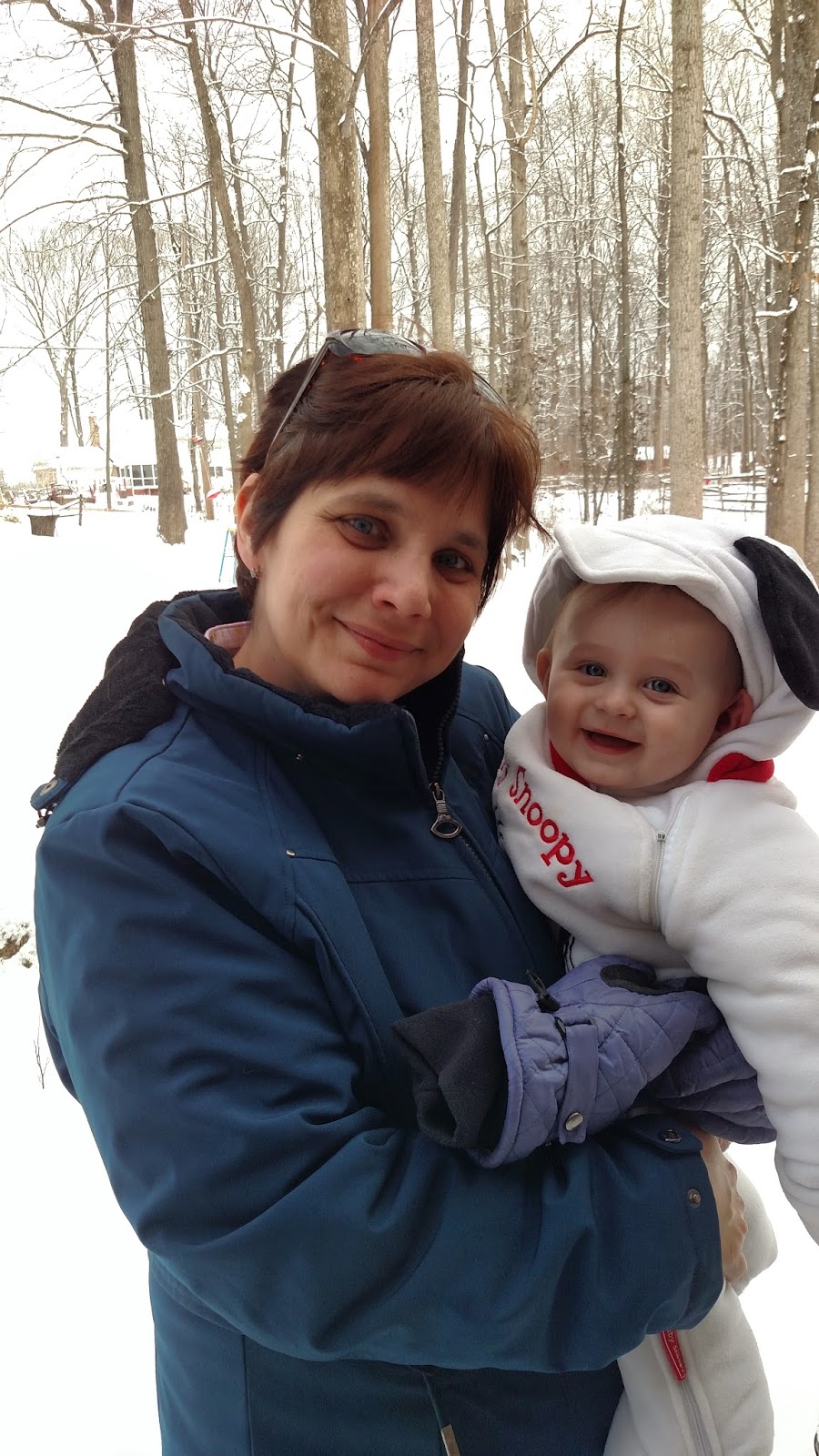 The photo below is of Robby when he was enjoying his first snow. 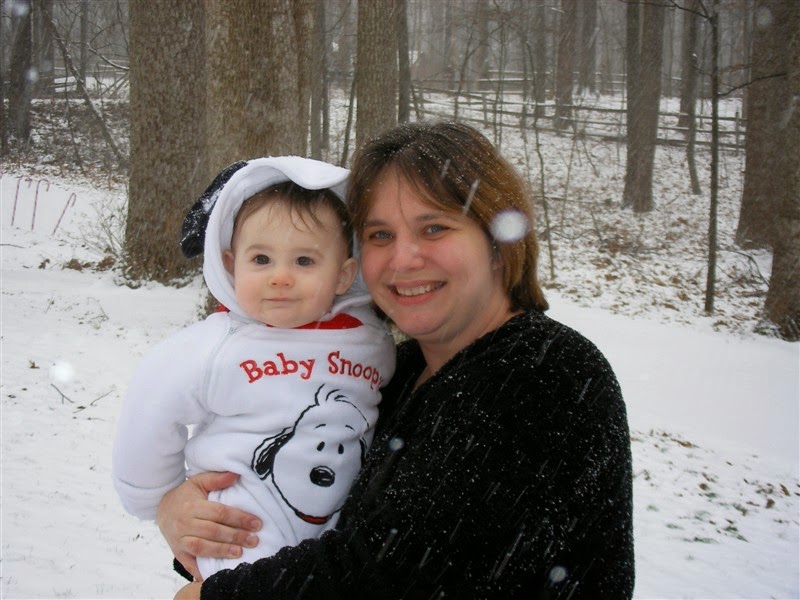 Out of His Mouth

Despite the fact that Robby has been attending the school for a year and a half, yesterday morning he was nervous about returning after break. He woke up with tears in his eyes as he tried to plea with me to stay home. Logic provided little relief from his growing anxiety. He admitted that he liked his school and that his friends and teachers were nice. Yet despite my pointing out all familiar and comfortable parts of his school routine, he felt uneasy about returning.

Since I know that he is happy in his school, I suspect that 16 days was too long for him to be away from his routine. Like me, he thrives on a predictable schedule.  Packing him into the car I was hoping that his mood would lighten when he saw his friends and his teachers.

Thankfully I was correct and my scared little Koopa evaporated as soon as he walked into the school.  His principal greeted him at the desk, asking about his holiday. As soon as he laid claim to a fantastic Christmas, his teacher approached and inquired about the much anticipated Penguin Plunge.  It was then that the morning began to spiral downward.

Without missing a beat Robby casually replied, "Well, I'm glad that I did it because it helped a lot of animals. But I'm not sure that jumping into a freezing cold river and freezing my balls off was the best way to start a New Year." I was mortified!

Let me tell you, there is no good way to steer the conversation after that remark. I quickly told him to watch his language, at which point he launched into an animated monologue defending his use of "ball." He  contended that it isn't a bad word like sh*t. It isn't even a private word like penis or fart. Over the snickering of his teacher and Principal, I ended his rant by snapping that it was inappropriate and promising to discuss the validity of the term "ball" at home.

I left the school embarrassed for what I'm sure is not the last time. Robby happily skipped into his classroom, no longer fearful of returning to school. I think I'll be the one battling nerves from now on, unsure of what will come out of my little cherub's mouth.

After an extremely busy Christmas holiday, today is the day that everything will return to normal. (Or at the least our schedule will return to the closest to normal that we can muster!) Both Scott and Robby return to school and, although they won't admit it, I think they are happy to be resuming their schedule. Even if they aren't thrilled about going back to school, this Mom couldn't be happier!

I love having them home, but 16 days was a long time to be out of our routine. They were both on vacation, but I was still working. Again I became frustrated about the constant interruptions when I was trying to finish projects.  I began to wake up before dawn to tackle my work in solitude. By the time they rolled out of bed, I had already worked 5 or 6 hours. I can keep that schedule for a week or two, but long term it begins to wear me down.

I'm going to try to temper my smiles as I kiss Scott before he leaves for work this morning. I know that my grinning from ear to ear as he drives away will probably be misinterpreted. I enjoyed having him home for two weeks, I just don't like the extra work involved with having them mulling around all day.  Robby has missed his friends so I suspect that he won't mourn the end of vacation as much as his Daddy.

This week we will all slowly ease back into our school schedules. With all of the holiday festivities, housework has been nearly impossible to tackle. Today I'm hoping to spend a few hours tidying up and getting caught up on laundry. I have to admit that I'm also looking forward to some quiet Timmy Time. I suspect that an afternoon of relaxing, rocking and playing might be in my future.