Scott and I have been together for 17 years and we have learned to predict each others movements and reactions. Every once in awhile though, he does something so out of his norm that it takes me off guard. Last weekend was one of those occasions.  For the first time since we met, Scott spontaneously planned an impromptu family getaway. I was flabbergasted when he emailed me the confirmation for Great Wolf Lodge.

I love taking mini family getaways, so much that the onus of planning and scheduling has always fallen on me. This is the first time that he has taken the lead, completely taking the family by surprise with his plans. Robby was delighted both with going to Great Wolf and the invitation to bring a friend along to enjoy the experience.  Without hesitation, he asked if he could bring his cousin.

I called my sister and asked if his cousin could come with us. While she said yes, I knew that it was only one hurdle for the adventure. I needed to get permission from her father who has custody on the weekends. Negotiating time with the kids during the weekend is difficult, so I knew that it was an uphill battle.  Ever an optimist, I gave it my best shot.

Despite my pleas, we were summarily denied. I say we because his decision impacted not only me, but absolutely devastated Robby. I hate and resent how divorce drama infiltrates into our lives!

After much discussion, Robby decided to extend the invitation to another friend. The original acceptance was rescinded last night, leaving us back to square one. I have an upset little Koopa who now thinks that he has no friends and that nobody likes him. I'm trying to explain that it is difficult to find somebody who is allowed to travel with another family overnight. Despite my logic, he is feeling deflated and lonely. I can't say that I blame him because I am finding myself feeling many of the same emotions.

Tomorrow we are headed to Great Wolf for the night, an adventure that was lovingly planned by Scott. I am going to do my best to make sure that the disappointments leading up to this adventure don't overshadow the fun. I'm sure that Scott and I will be able to divide our energies between Timmy and Robby so that both boys have a blast.  Wish us luck!

It is safe to say that Robby and I hold an equal disdain for sparring week. He hates donning all of the pads and entering the "combat circle." I hate helping him put on all of his pads and watching him in the "combat circle." My little Koopa has so many attributes, but aggression is not one of them.

Despite wearing every pad available, Robby is petrified of being hurt. He also holds a strong aversion towards possibly causing pain on his opponent. While the "combat" at this stage is supposed to be light contact, Robby claims that it is better to be safe than sorry. Therefore, he only attempts to fight back when the instructor stands next to him yelling. All other times he spends the sparring session frantically hopping, dodging, weaving and sometimes blatantly running away from his opponent.

Yesterday he was paired with a particularly aggressive six year old girl. In Robby's defense she is also scheduled to be tested for her black belt this month, so she is far superior in both skill and experience. This young lass was not lacking in aggression, and took after Robby like a pit bull going after a bone. With her arms and legs in full attack, Robby resorted to just trying to run away from her.  When he found himself pinned against the back wall with no escape, curled up into the fetal position in the corner.

His instructors, to their credit, tried to encourage Robby to fight back. After he was coaxed out of the corner he assumed his spot on the mat and continued to spar. He made contact a few times, but at this point I'm fairly certain that the little girl was going easy on him. Class seemed to drag on forever, although I'm sure it was longer for him than for me. We went out for a milkshake on the way home, which seemed to soothe some of his frustrations.  Thankfully, we won't have to spar again for a few weeks. Maybe by then he will have more confidence to defend and to fight back. 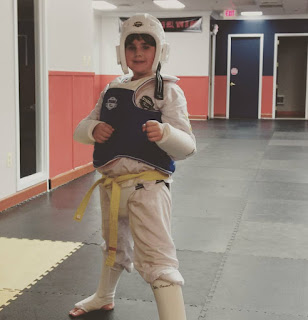 Yesterday the weather was unseasonably warm. For the beginning of February, 70 degrees feels heavenly. Of course, my boys would prefer snow because they are longing for cancellations and delays. I'm sure that the winter will rear its head soon, but in the meantime I'm thoroughly enjoying the spring temperatures.

The weather was so warm yesterday that I opted to forgo the jeans for a pair of capris. Timmy happily sprinted to the car when I invited him to go to the park. He was delighted with the opportunity to run around outside, to climb on the structures and slides, and to swing as long as he wished.  He was definitely a happy little guy!

Playing with him at the park, I slowly became aware of the reactions from our fellow park goers. At first I thought that they were looking surprised and stunned because Timmy is so incredibly adorable (yes, I realize that I am biased). When a child ran up to the slide, took one look at me and sprinted in the opposite direction I realized that my cute Hamlet was not garnering the attention. The culprit was me.

After wearing jeans for a few months, I have become accustomed to blending in with the public. I completely forgot that my leg was visible. The looks that I was receiving were because of my prosthesis. Once I figured out the cause, I opted to ignore the glances and continued to play with Timmy.

Over the past few months I had become temporarily normalized while wearing jeans. Yesterday, with the weather allowing me to tap into my spring wardrobe, I failed to prepare mentally for the prosthesis being visible. I was reminded that, unless I purposely conceal my prosthesis, I will always be the recipient of second glances, occasional snickers and gawking stares from strangers.

Yesterday my anxiety tracker received a workout as it buzzed me every five minutes throughout the day. I knew that trying to keep my tension in check was going to be difficult considering the task at hand, and by the middle of the afternoon I just gave up trying. Timmy was being seen by pediatric immunologists at Children's Hospital for a follow-up. When absorbing important medical information about your child, anxiety is par for the course.

My little Hamlet was a trooper, getting poked and prodded with minimal complaints. It breaks my heart each time they stick him with a needle, and I have no doubt that the pain lingers with me longer than with him. Thankfully he is still soothed by a lollipop, a kiss on the cheek and a song.

We have a diagnosis and I'm trying to look on the bright side. It could be much worse as we aren't dealing with a fatal or degenerative condition. I am grateful that we have a plan (even if I don't necessarily relish it), but I am saddened that one is necessary.

Knowledge is power, but yesterday I was caught off guard. Today I'm going to formulate my questions, make a calendar and begin to move forward towards what I am calling Operation Rebuild Hamlet's Immune System (ORHIS).  Hopefully, as I do more research and become more comfortable with our new reality, my anxiety tracker will calm down.
at 6:54 AM No comments:

Fun Weeked Before A Busy Week.

Friday I packed up the boys and headed to visit with my Mom. Our visit was quick, only one night, but the time away was just what we all needed. It was nice to be able to just relax and watch the boys play. The change of scenery did us all some good!

Saturday we headed back to Virginia so that we could spend some family time together before the hectic work week begins. On Sunday Scott and I took Timmy to his favorite toddler playground. Although Timmy and I are frequent visitors, his Daddy accompanying us is a rarity. Timmy was quite smitten with having his Daddy there, and seemed to dedicate the time to showing off and demonstrating everything the playground offers.

In the afternoon Scott and Robby went out for lunch while Timmy and I stayed home to play outside. It is hard to believe that just a few days ago he was on the couch with a fever. His energy was seemingly endless as he ran through the yard giggling for hours. My little Hamlet gets sick quickly, but thankfully he recovers nearly as quickly.

Today begins a busy week, filled with meetings and after school obligations. Scott and I will both be dealing with hectic schedules and will rarely intersect for family time. These over scheduled weeks don't happen often, but they are always stressful and draining when they do occur. Hopefully everything will go smoothly and we won't experience any hiccups. The schedule is so tightly crafted that the smallest glitch could impact the entire day. 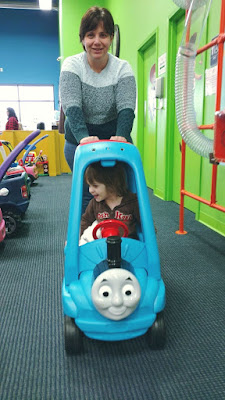 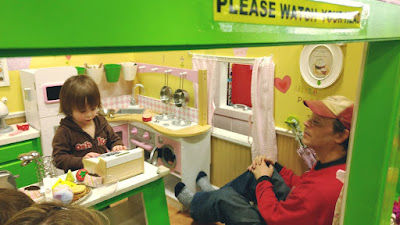