These summer storms are wreaking havoc on my limb. My phantom pain was off the charts for the past few nights. Despite being exhausted, as soon as my head hit the pillow my leg began to jitterbug. The stinging and kicking continued until the wee hours of the morning, resulting in little sleep and a frustrated mood.

I detest phantom pain. It feels like my bouts are becoming more frequent and increasing in intensity. Of course, that could just be my sleep deprivation. When the days are consecutive, my once or twice a month frequency suddenly feels overwhelming and oppressive.  I am trying to remind myself that I am fortunate I don't suffer on a daily basis, but I'm so tired right now that my self-talk isn't reaching a receptive audience.

Today I am going to try to slow down and relax. Hopefully I'll be able to take a nap (I certainly need it). The weather is supposed to again be hot, so I'm sure I'll be in the pool with Hamlet. Fingers crossed I get some sleep soon!
at 6:15 AM No comments:

We had some wicked storms blow through our area in the afternoon, forcing Timmy and I to abandon our pool fun early. I saw the dark clouds rolling in and the trees began to sway, signaling that the predicted storms were imminent. I hopped (literally because I wasn't wearing my leg) out of the pool and covered it with the tarp and tent. We made it inside moments before the rain began to fall.

The storm was strong, with torrential downpours and high winds. I watched helplessly as our pool canopy collapsed and landed on our little pool. My heart sank because, from my vantage point in the house, it looked like the pool had popped. After the storm we surveyed the damage and, thankfully, our little blow-up pool was still intact.

Scott managed to reshape our pool tent. Although it now has a hole in the roof and the metal is a tad wonky, it will still serve as adequate sun protection when we are swimming. It is amazing how relieved and happy I felt when I realized that the pool had survived. I think I am enjoying our daily swims as much as Timmy!
at 6:55 AM No comments:

Another summer day that felt very much like all of the others. With the exception of Robby playing his WWII role playing game with his friends and teacher, my day unfolded with no variations or surprises. I don't want to complain, but I really miss my summer adventures!

I woke up early, worked until after lunch and then spent the rest of the afternoon in the pool with Timmy. I climbed out of the pool in time to make dinner, after which I continued working until it was time to go to bed. My schedule is pleasant albeit incredibly mundane and predictable. I'm doing my best to remain upbeat, but I have to admit that I'm bored.

The rising Covid numbers make me too nervous to venture into the community. Scott still does the shopping, trips which are both rare and carefully planned. I miss being around people (other than my immediate family) but I am trying to remind myself that staying patient is paramount.
I'm so grateful that we have our pool and that Timmy is at an age where he finds it wonderful. I know that his memories won't recall the small size of our pool. Instead, he will remember spending the summer splashing and playing in the pool with his Mom. If we didn't invest in our blow-up pool, I think that our summer would be very different. 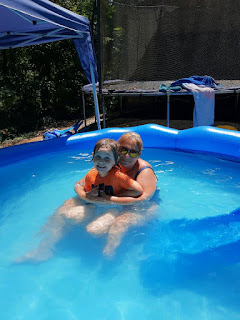 Our social distancing summer is beginning to feel like Groundhog Day. I woke up early to tackle some work and hopped into the pool with Timmy in the afternoon. We splished and splashed until it was time to make dinner, and then I continued working until it was time to go to bed.

While I was in the pool, Robby and Scott played video games and tinkered around the house. Although he hasn't admitted it, I know that Robby is becoming bored. Thankfully today he has a fun disruption to his schedule, and I know that he will have a blast!

Robby's WWII role playing game teacher contacted all of his students a few weeks ago to gauge interest in taking the battle to a virtual platform. Without hesitation Robby enthusiastically signed on. Today he is meeting with his class (and teacher) on Zoom to continue their strategy game.

He was so excited last night that he kept saying he wasn't going to be able to sleep. He cleaned his computer area, polished the lens to his web camera and studiously watched videos detailing the battles his class use during today's game. I love his enthusiasm, and I am so grateful to his wonderful teacher for providing this experience for the kids.

While Timmy and I are hanging out in our pool, Robby will be (virtually) crafting battles in Europe. I am glad that he has something to look forward to, and something fun to do with his time. More importantly, I'm glad that he will be able to hang out with his friends again.  In person isn't possible right now, but virtual is fantastic.
at 6:36 AM No comments:

This past weekend was hot. I'm not talking about warm. I'm talking about walk outside, take your breath away and start to pant hot. While Robby and Scott hunkered down inside, trying to seek relief from our overworked air conditioner, Timmy and I took a more sensible approach. We put the shade over the pool and swam the weekend away.

My little fish and I spent nearly four hours every day in the pool. Although small in size, our blow-up pool has yielded an impressive amount of entertainment and fun. With everything else closed or restricted because of Covid, I am so glad I decided to go ahead with our pool. (I'm still lobbying for a bigger and more impressive version, stay tuned!)

Between swimming and trying to beat the heat, the rest of our weekend was uneventful. I love summer, but I don't like these "make your melt" temperatures. Of course, there isn't anything we can do about it so I'll try to withhold my complaints.  At this point, I'm just grateful I have our little pool in the driveway.
at 8:48 AM No comments: