Yesterday we didn't do anything terribly exciting, which was probably a good thing after the frustrations encountered while flying.  Neither Timmy nor I slept well the night before and, although I didn't get to take a nap, a day of doing nothing important was just what we needed. I think that Scott also appreciated the quiet time visiting with his family.

I was proud of both Robby and Timmy yesterday. Both remained well behaved and compliant, despite lacking the normal stimulation of their toys and activities. I am especially proud of Robby for keeping his boredom to himself and not complaining.

Today we are headed to the aquarium, which should be a lot of fun. Robby has been looking forward to viewing both the turtle exhibits and the sharks.  I'm certain that Timmy will be mesmerized by the experience. He squeals with delight when he sees the fish tanks in Walmart, so I expect visiting a proper aquarium will blow his little mind.

Wanting to be Drunk On a Plane

As our plane was soaring into the clouds yesterday I couldn't help but feel as if we were flying deeper into the abyss of Hell.  Timmy was not amused with his forced confinement, and all of my efforts to occupy him were in vain. Lollipops, goldfish crackers, french fries and small plastic toys littering the floor became a testament to his refusals. He was miserable and he was loud.

Scott and Robby took advantage of the empty seat row in front of us by moving from the little terror at the first opportunity. While I knew that logically the move was prudent, I couldn't help but feel abandoned with my little flying demon. In our family, as in many that I know, the Mom tends to draw the short end of the straw with these opportunities.

I felt a surge of relief when the plane finally touched down. As soon as he was released from the chair, Timmy was smiling and happy. He jumped down the aisle with a huge smile as he deplaned while I followed red faced and frazzled, apologizing profusely to anybody who attempted eye contact.

Unfortunately the flight was not the only stressful event. When we arrived at baggage claim we learned that the airline misplaced our car seat. I think that the luggage attendant could tell that I was at my breaking point. With tears about to start rolling she swooped into action and produced a new car seat for us to use until ours is found. While it isn't as nice as ours, it is safe and allowed us to finally leave the airport.

Timmy had an extremely difficult night sleeping, probably from his long day of traveling and being in an unfamiliar area. I was up soothing him every 15 minutes from midnight until dawn. (There is that short straw in action again.)   Hopefully today he will take a nap because I certainly need it!
at 8:11 AM 1 comment:

Timmy on a Plane

It is safe to say that I have been dreaded today for the past few weeks. Today we will attempt to fly with Timmy, and I'm anxious about his behavior. He is my constant motion, mischief seeking kid. I doubt that he will be happy about being strapped into an airline seat for two hours.

When Timmy is bored in the car he will just scream. I can turn up Veggie Tales to drown out his wailing, but that won't be possible on a plane. If he melts down he will be disturbing not only us, but a plane full of judgemental strangers.

We have a bag packed with lollipops and toys, ready to bribe our little hellion if it becomes necessary. Hopefully he will surprise everybody and the novelty of a plane ride will supersede his desire to roam and run. A girl can hope, right?

Yesterday we were busy having fun. Robby woke up, grabbed a waffle and took off playing with Jack. I love seeing him so happy, but part of me is saddened at the same time. I can't help but think that he is going to be devastated when his friend moves away.

In the morning I took Timmy to Milla's Playground, a toddler utopia of pint sized toys and activities. Despite visiting several times a week, Hamlet never becomes bored playing. He climbed and played for about 90 minutes before I finally coaxed him back to the car with the promise of a lollipop.

After lunch we all headed to the pool. Despite being hot, the pool was virtually empty. The kids had the fun of the facility, and took full advantage of their reign.  Timmy, Robby and Jack splashed and played for almost three hours. By the time I loaded the waterlogged kids into the car, they were  exhausted and famished.

Today is going to be busy but unfortunately not nearly as fun. We are packing to head to Ohio for a few days. The boys are excited but I am feeling overwhelmed by the preparations. Hopefully I'll be able to finish everything in time for another quick pool trip.
at 7:02 AM No comments:

Something to Stare At

It took awhile for us to get there, but it is finally summertime. With the cold and dreary Spring in the past, I happily exchanged the jeans and sweatshirts for sundresses and shorts. This year the hot weather feels special because it felt like summer was never going to arrive!

Unfortunately, wearing shorts and sundresses does have one obvious drawback. I become a lightening rod for looks, second glances and whispers whenever I venture outside of my neighborhood. Perhaps Timmy is rubbing off on me, but this summer I have been feeling a bit mischievous. I decided that since people are going to stare at my prosthesis, perhaps I should up the ante.

Friday afternoon I went to the hairstylist and felt playful when choosing the color. I have always wanted to be wild, but work obligations have kept me conservative. Realizing that I didn't have any pressing meetings or personal obligations in the coming weeks, I shocked everybody by opting for bright teal highlights around my face. I figured that since people are going to look at my leg, they might as well stare at the one legged lady with the teal hair.

My new teal hair is definitely out of my norm, but I love it. Maybe this is the beginning of my midlife crisis? Scott and Robby were certainly shocked, but they also complimented my new look. (Of course, I think that they both realized that a compliment was obligatory. Neither wanted to suffer the wrath of not responding.)  I don't think I'll keep the teal highlights indefinitely, but I am definitely having a good time with my wild hair. 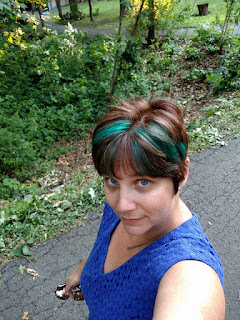