After an exhausting trip to the allergist, we still have no definitive answers about Timmy's recent hive outbreaks.  We did receive medical confirmation that the hives are not being induced by a food allergy, which leaves me with mixed emotions. On one hand it is nice to know that I am not inadvertently making him ill, but it also leaves the looming question of why the sudden onset.

Timmy was a trooper through the testing and, although he was clearly miserable, was compliant and   It broke his heart to see him looking that way, so he decided to swing by the toy store on his way home. He arrived carrying a huge box containing a 2 1/2 foot tall car spiraling car track. It was the first time I saw Timmy smile in nearly a week. 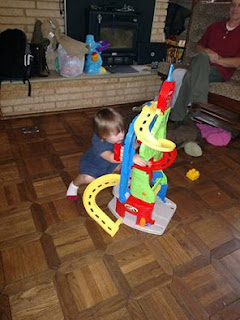 sweet to everybody he encountered. By the time we left the office he was sore, exhausted and feeling sick. Wanting to know how he was doing and lacking the words to aptly describe what I was seeing, I sent Scott a photo of our little guy.

Because food allergies have been eliminated as the cause, we are beginning the steps to explore various auto immune issues. We don't know anything specific so I am trying to keep myself from speculating on the possibilities.  Dr. Google is a dangerous thing when it involves your child, and we are all better off if I just wait for the test results to show a clear diagnosis.

In the meantime, we have a plan to treat his hives and he will hopefully be more comfortable soon. If we can stop the itchy outbreaks, I think he will start to feel better. I really miss my happy little Hamlet!
at 7:06 AM No comments:


I don't know what is going on, but I do know that my little Timmy has not been well lately.  Without any outward cause, over the past seven days I have witnessed him become spontaneously covered with itchy and hot hives. His right eye lid is swollen and morphs through various shades of purple. He is not his typical energetic self and has even resumed napping in the afternoon.

Today we have an appointment with the allergist, and I am anxious for answers. At this point I don't know if what he is experiencing is related to a food allergy or if there is another underlying issue.  All I really know is that I'm scared and that I need to find out what is going on with him.  At this point, I'm hoping for the best but bracing myself in case his symptoms have a different cause.  Please wish us luck!
at 6:38 AM No comments:


Last week Robby tested the waters of Karate. Thanks to a Groupon, he signed up for a six week introductory program. To the surprise of both Scott and me, he absolutely loved it. He was eager to go to each class and anxiously demonstrated his new skills and techniques to anybody who would watch.

Yesterday, as he was preparing for class at the Dojo, I was pulled aside by the office manager. I was prepared for a hard sell on the membership, and I was determined to stay firm on waiting to enroll. In the battle of the office manager versus  Momom, the manager won. The pleas of Robby to continue lessons with his new friends sealed the deal, and I signed the contract.

My little karate kid beams when he is on the mat. He is definitely not the most coordinated, but he tries and he is having fun. I hope he continues to enjoy it because we are committed to three lessons per week for the next year. (Did I mention that I completely folded during the sales pitch?)

At the end of the lesson, Robby was presented with his white belt. The entire Dojo was called to attention to witness the belting ceremony. My little Karate Koopa was beaming as he was bestowed with a bright white belt. As soon as we left and returned to the car he asked for my telephone. He was excited to call his Nana to tell her all about his achievement, remarking numerous times that it was a "proud day."

He doesn't yet realize that his earning the beginner belt was dependent solely upon my credit card clearing, and quite honestly I don't think it is something that I need to point out to him. He pushed himself outside of his comfort zone to try Karate, and he should be proud. I hope that he continues to make friends and flourish because, if he does, it will be worth every cent. 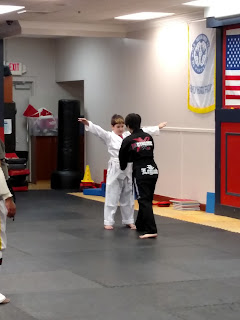 
The Paralympics are being held in Rio this week, but the media coverage has been a mere blip against the constant stream of news. Those who are immersed in the disability community are excited about the feats of these athletes, but it feels like the general public either doesn't know about or doesn't care about the games. I would like to think that the indifference is because the games are not receiving the same hype as the Olympics. Perhaps the timing is less than opportune as households across the country are struggling to regain a sense of normalcy with the new school year schedule. Whatever the reason, the reception has felt deflating.

This past Sunday, four Paralympians ran the 1500 faster than it was run during the Olympic finals. Sadly this amazing feat has been unrecognized and the athletes did not receive their due mentions on Sport Center and in the sports pages.  The four runners are completely blind yet ran faster than the Olympic gold medalist at the same distance. If you ask me, that's incredible and definitely newsworthy!

Some Paralympic competitions are being streamed online and a select few have dedicated television viewing times on select NBC channels. Juxtaposed against the nonstop, multi channel coverage of the Olympics last month, the Paralympic Game coverage feels woefully inadequate. Of course, I am probably biased because I have several friends who are competing in the games.  I feel slighted on their behalf.
at 4:35 AM No comments: