Oh my goodness I'm happy that it is finally Friday. This week has left me frazzled and exhausted as I tried to figure my way through the school schedule, caring for Timmy by myself and managing all of my job responsibilities. It has become quite obvious that I need to improve my organization skills quickly or my delicate house of cards will quickly tumble.

Timmy has been particularly needy this week, probably because he was missing his brother and daddy.  Each morning he stands in front of our window and sobs when Scott drives away. He has a nearly identical reaction when we drive away from Robby's school after dropping him off. It feels like I spend my entire morning trying to console my heartbroken little boy.

This weekend will be spent relaxing and getting geared for the school year. I am hoping to spend a lot of time developing and implementing new organizational strategies. If scrambling around this week has taught me anything, it is that I am in desperate need of organization!
at 6:32 AM No comments:

Yesterday afternoon I had a glimpse into my future and it terrified me. We were at the farm, picking grapes when Timmy decided to explore. At first he was playing in the vineyard but quickly made his way to the small dirt road. In an instant he took off running, occasionally laughing and squealing as Robby and I chased.

My current suspension system on my leg works great for walking but does not create a strong enough seal to run.  With each step I felt my leg release, and I realized that it was a matter of time before I ran out of my prosthesis altogether. I was horrified when I realized that I couldn't catch him.

At one point Timmy stopped and took off his shoes, allowing us to almost catch up with him. Typically I am frustrated when he sheds his shoes, but this time I was relieved because I thought that we would quickly swoop him up. As it turns out his shoes were slowing him down, and he was able to run much quicker with his bare feet. The fact that we were on a gravel road seemed inconsequential.

I'm sure that our frantic parade was quite a sight. It isn't everyday that you see a frazzled one legged woman and nine year old running at full sprint after a giggling, barefooted toddler. Hamlet was having a great time with his newly discovered game of chase, but neither Robby nor I were amused.  Robby finally ended up throwing Timmy's shoes at him, hitting him on the back in an attempt to slow him down.  My little Koopa's plan worked, and Timmy stopped to look at the shoe that just hit him.  Robby was able to grab him before he continued running.

I was shaken for most of the day after our vineyard race. I couldn't help but ponder if I can't keep up with my 16 month old, what am I going to do when he is swifter and stronger?  Keeping up with Timmy is a matter of safety and, in my opinion, is absolutely  non-negotiable.  I have to figure out a way to physically be able to run after him should he sprint away again.  Sometimes being an amputee stinks, and this was one of those occasions!
at 6:24 AM No comments:

I am trying to refrain from self-criticism as we make our way through the first few weeks of school, but I am failing miserably. I just can't seem to create a morning routine and schedule that flows smoothly. Despite my homemade pancakes and bacon breakfasts, each morning I find myself barking at Robby to get into the car. This is definitely not the way I want his day to begin!

I will take some blame for the morning chaos, but I know that my little Koopa must assume some responsibility as well.  A switch was flipped when he turned 9, turning him from sweet to snarky. He doesn't blatantly talk back, probably because he knows that it would not be tolerated, but his tone and demeanor wreaks of adolescence. He always has to have the last word, everything that his father and I do is silly or wrong, and he moves at his own speed.

Not wanting to be left out of the chaos, Hamlet takes full advantage of the opportunity to create his own mischief.  I walk back into the bedroom to remind Robby, for the 10th time, to get dressed and Timmy will duck into the kitchen to play with the cat food.   If I'm not hounding Robby to get ready, I'm cleaning up after Timmy. By the time I finally drop Robby off at school I'm both frazzled and exhausted.

I miss my sweet little Koopa.  I am not ready for the teen years. I'm promised by other parents that he will return- in about 20 years.

Hopefully we will settle into a routine, and we can reign in Robby's snarky demeanor. I know that we won't extinguish it completely, so I'm hoping to remold it into mild sass.  If we don't do something, this is going to be a long school year!
at 7:10 AM No comments:

Another successful first day of school is in the books. Robby didn't complain about returning to school, but he did frequently voice his displeasure with the end of summer vacation. Despite his lamenting, he readied himself without much prodding so I consider the morning a success.

"Roll with it" seems to be the emerging theme for the school year.  A few weeks ago we learned that Robby's school was moving into a new building.  We had hoped that everything would be complete by the start of classes, but it quickly became apparent that the new location was not going to be ready for students in September. Dedicated to her students, Robby's teacher stepped up and offered her home as a make-shift classroom until the new building is ready.

Although attending classes in the teacher's house is not ideal, we are going to "roll with it."  Hopefully the new building will be ready soon and everybody can return to a more traditional setting. In the meantime, we are grateful to his teacher and her family who stepped up and made huge sacrifices for Robby and his friends.

Robby's first day of school jitters melted away almost as soon as he walked into her home. He was met by the smiling faces of his friends, all excited to share stories about their summer adventures.  Robby quickly gave me a hug (but refused my kiss) and shooed me out the door. I was sad leaving him but my own emotions were quickly overwhelmed by Timmy's ire. He was furious that his brother did not return to the car with us, and screamed until we picked up Mr. Bill for breakfast.

I wasn't sure that Timmy would be up for our traditional first day of school breakfast, but his screaming turned to giggling as soon as Mr. Bill opened the car door. He was in full entertainment mode throughout the meal, delighting both Mr. Bill and everybody in the restaurant. The excitement of the morning caught up with Hamlet, who fell fast asleep in the car on the way home. He slept through the transfer to his crib, allowing me some much needed quiet time. 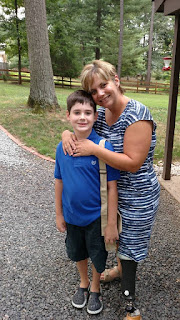 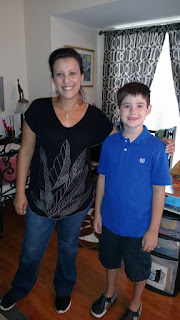 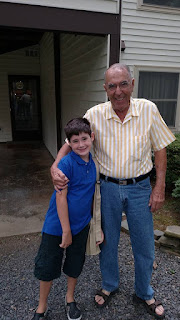 Saturday afternoon Scott and I finally decided that it was time to have a talk with Robby. We knew that it needed to be done, yet we were both dreading the conversation. Although I suspected that he knew it was a matter of time, I know that the words still stung when he heard them. Carefully staging the conversation over a bowl of ice cream we revealed that summer vacation was over, and on Monday he was going to return to school. He was not a happy Kooopa!

It is hard to fathom that this morning I will drive a fourth grader to school. Didn't he just start kindergarten? Although I know that he is going to have a great year and learn volumes, it still saddens me to see him leave.

Per our tradition, Mr. Bill and I will be going out for breakfast after I drop Robby off for his first day. No matter what grade he is entering, I always seem to shed a tear when I drive away on the first day. Going out with Mr. Bill provides the distraction that I need to help me acclimate to the emptier house. I listen to his stories and he laughs at my shed tears.

The house will feel lonely during the next few days as Timmy and I adjust to be alone. I suspect that he is going to miss his brother dearly, and I fear that he will invent mischievous ways to fill the void. My little Hamlet has a way of exploring and having fun that always seems to leave a mess in his wake.  Chasing after his fearless curiosity is definitely going to help fill the time until I pick up Robby from school.

First day of school pics will be posted as soon as I come home from breakfast, so check back!