This week I've changed my fitness routine. Typically I concentrate on aerobic activity, but that is not meeting my impending needs. Instead of worrying about calorie expenditure, I've been focusing on stretching. I need to be limber today, with stealth-like reflexes and the agility of a cat.

Yes, Black Friday is finally here. Thanksgiving evening the newspaper was strewn around the living room floor as we devise our plan of attack. Scott and I are now armed with local maps and the layouts of our favorite stores. Black Friday shopping has become a family sport as we search and body block our way to securing the deal of the year. 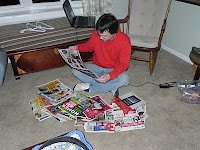 The Friday after Thanksgiving is the one day of the year where I relish my disabled parking status. As all of my able bodied shopping competitors circle the lots to find a place to park, Scott and I ease into the handicapped spot in front of the door. Easy to get in but, if you are an expert Black Friday shopper like me, you appreciate how quickly I can exit and dash to the next store.

Our competition is steep as hoards of early birds converge to scavenge for their deals. Because of my prosthetic, I am often underestimated. I am not expected to be fast and swift, and I have learned to use this misperception to my advantage. After I race the shoppers through the store, ducking and weaving, people are surprised when they are out maneuvered by an amputee!

For me, Black Friday is as much about the thrill of the chase as it is saving money. Usually, we buy very little, but there is something special about standing in a long line before dawn with hundreds of other bargain hunters as we each vie for position. For my husband and me, the Christmas season hasn't officially begun until we've thrown a few elbows and grabbed a DVD just as someone else is reaching for it. Great sport! I hope you will enjoy your day as much as I will enjoy mine.

The following paragraph is meant to be sung to the tune "Over the River" (from Snoopy's Thanksgiving)
"Over the river and through the woods, to Nana's house we go. Momom knows the way, to drive the SUV but the traffic is so slow. Over the river and through the woods oh how the leaves do blow. They fall all around as the season abounds so who cares if we have to drive slow."

I love Thanksgiving. Not only do I get to eat a gluttonous meal without guilt (calories don't count on holidays) but I get to spend time with my family. I may be biased, but I believe that I have the best family in the universe! Not only do we all get along, but we all genuinely like each other.

Scott and I have been talking with Robby about the holiday. We've read him books about the first Thanksgiving dinner and have been talking to him about counting his blessings. We decided that, this year, we would each list the top five things for which we are thankful.

This year, I am thankful for:
1. My family
2. the love and support of my friends
3. the health of my loved ones
4. exciting professional adventures
5. the ability to stay home with Robby


Scott is thankful for:
1. His family
2. that everybody is healthy
3. a job that he likes
4. hugs from Robby when he comes home from work
5. his wife's good cooking

Robby is still learning to master how to count. I think the concept of "five" alluded him. This year, Robby is thankful for:
1. Mommy and Daddy
2. Charlie (his cat) and Sophie (my cat)
3. Nana, Candy Papaw and Grandma
4. Mr. Bill
5. cookie dough
6. vanilla ice cream
7. Momom's running leg
8. sticks
9. dirt
10. worms and bugs
11. glow in the dark light sticks at night
12. bubbles
13. burping and "tooting" at the table with Daddy

On My Soapbox About TSA

I have written about TSA numerous times, but I feel compelled to discuss this topic and to offer my opinion on the current state of the agency. Pardon me as I crawl up on my soapbox.

I have had my own horror story with TSA when my leg and liner were removed and my four year old son was intimidated and frightened. I admit that I am guarded in my interactions with TSA. Although my encounter was not the norm, I often detect an unsettling level of uncertainty from my screeners.

All too often the agents appear disorganized and confused by my prosthetic. There are vast differences among the screening process between airports and between agents. As an amputee traveler, I never know what to expect.

The disabled community deserves to be respected by TSA. In my opinion, the lack of education and training on how to deal with the handicapped community is appalling and insulting. We are missing limbs, may be reliant upon wheelchairs and may have medical issues, but we deserve to be screened in a reliable, compassionate and quick manner.

Do not ask me what other airports do during the screening process. Don't expect me to accept insensitive remarks that are overheard being made to your coworkers about my limb. I am not at the airport to serve as your training visual aid. Please don't practice on me. I am not a dress rehearsal!

Despite the myriad of complaints I hold about the agency, many might find it ironic to learn that I am not anti-TSA. I am concerned about the quality and the consistency of the screenings I undergo. I don't feel safe when inadequate training is demonstrated through blundering and inept practices.

I don't now, nor have I ever, contested the need for extra scrutiny for those with a prosthesis. I accept the extra screening as I have accepted many nuisances that I have encountered since I lost my leg. I just know that we can do better.

Common sense has been lost. Asking a woman, a flight attendant, to remove her prosthetic breast serves only to harass, not to promote security. Asking the passengers to interpret their own Cast Scope images, which has happened to me on numerous occasions, is illogical and deems the technology irrelevant. The new pat down procedures seem to be carried out in an effort to demonstrate the power of the TSA rather than to secure the skies.

As the holidays approach, we are going to be hearing more stories about TSA blunders and abuses. Until the agency is willing to take a look at their hiring requisites and training practices, improvement seems unlikely. In the meantime, ACA has asked to be informed of any inconsistencies or abuses that are encountered by the amputee traveler. If you have a problem or question, please contact them. Perhaps we will have more strength in numbers.

On a lighter note, sometimes a little humor helps.

My days in New York City were filled with desk-side briefings. I was simply asked to tell my story, to talk with the writers in the hopes that Ossur (and AmputeeMommy.com) might be referenced in a future article. My meetings were not expected to generate immediate results; I was told that it often takes 6-8 months for a written piece to materialize.

It was a huge surprise when Friday afternoon I received an exciting email. Popular Mechanics magazine promptly had written and published on-line an article discussing high tech prosthetics and TSA. It is rare that a desk-side briefing results in a full article within 48 hours.

Saturday morning, still feeling elated from the publication of the story in record time, I believed it was going to be a wonderful day. I grabbed a mug of gingerbread coffee and settled in to watch the morning news. I was numbed by the first story.

A 15 year-old boy from Scott's school was stabbed on the way home from school on Friday afternoon. He sustained a stab wound to the heart and, despite being air-lifted to a trauma center, he passed away. I began to cry when I thought about the grief stricken parents of this boy. Calling the incident "tragic" doesn't seem strong enough.

I woke up Scott and relayed the news story. The look on my husband's face when I repeated the boys name let me know that my fear had been realized. The boy that was murdered was one of Scott's students.

Miguel (Mickey) was, by most accounts, a good kid. He was a special education student who was liked by his classmates and teachers. He worked hard and was respectful. Scott worked with him a mere two hours before the attack.

Friday afternoon, Mickey was on his way from school to attend an after-school program. He was in a public area, walking with a group of friends. News reports indicate that he was somehow pre-selected for this attack. He was approached by at least two men and systematically stabbed in the heart.

The attack is being investigated as a gang initiation, although this has not been confirmed. For whatever the reason, it was a senseless act of barbaric violence that stole a good kid from his parents, family, friends and the community.

Self-contained special education classes are unique. Many of the students have been in the same classes together since elementary school. Tight bonds are formed among the students as they have grown up together. The loss of their classmate and friend will forever and fundamentally change this group of students and their teachers.

How do you explain the murder of a friend in a way that a special education student will understand? How do you help them cope with the empty chair in the classroom and the fear that this type of attack may happen again? This will become my husband's, along with the other self-contained teachers, job in the coming days and weeks.

This week, as you prepare to celebrate Thanksgiving, please take a moment to think about Mickey. He was a sweet kid who is loved and will be missed. Rest in peace, Mickey.
at 4:39 AM No comments: