This has been a crazy week and I'm grateful it is winding to an end. I'm going to use the weekend to reset and reorganize. I need to come up with a better way to entertain the kids when they become bored. I recognize that their activities have been limited because of the pandemic and they need help coming up with productive ways to occupy their time. Left to run wild, they quickly become feral.

Robby's rock band concert is on Saturday. Unfortunately, because of social distancing and other pandemic precautions, the audience is severely limited. Instead of rocking out in front of a full restaurant/ bar, the kids will be playing in front of one select parent per member.

Because of his musical history with Robby, Scott has been elected the family representative. It breaks me up that I won't be able to hear my Koopa play, but I know that the rules have been established for sound reasons. Scott has promised to record every song and to provide me with updates.

Hopefully next year life will normalize and I'll be able to watch him rock out in person!

I was optimistic that yesterday was going to be a better day. I meditated before I arose from bed and I was determined to remain patient and calm. Despite my best intentions, Circle Time broke through my fortress of calm, leaving me on edge and with raw anxiety.

Yesterday Timmy's class learned to draw the Grinch. This activity was announced on Monday and all of the kiddos were excited. I have to admit, as a Grinch fan, I was also intrigued. I've never been a talented illustrator and the prospect of being able to sketch one of my beloved characters piqued my interest.  Before class we gathered up all of the required art supplies and prepared to learn.

In past activities, Timmy's teacher guided the students through the activity with little problem. Yesterday, she played an instructional video on how to draw the Grinch, frequently pausing so that each student could catch up. Although the video was designed for a student, it was most certainly not intended for kindergarten. The artist spoke quickly and the video was lagging behind the audio. We tried to keep up, but it was nearly impossible.

Ten minutes into the video and frustrated that his lines did not resemble the artist's work, Timmy proclaimed, "This is some Grinchy bullsh*t."

The next thing I heard was a little girl declare, "Timmy said a bad word." (We couldn't apologize because we were immediately muted.) Thankfully a little boy was melting down at the same time. He began throwing this crayons on the ground and screaming, "I'm not going to do this anymore."

Somehow we all managed through the remaining 20 minutes of the instructional video. I think everybody, including the teacher, was relieved when the activity was over.

Sometimes I go to bed feeling comfortable that I was a good mom during the day. Knowing that both boys had a good day and had gone to bed feeling happy and loved fills me with peace and contentment. On those nights I drift off to sleep easier and tend to rest deeper and for a longer period of time.

Last night was not one of those nights. I slept horribly, but I'm not surprised because I went to bed feeling frustrated and ashamed of my mothering. Yesterday, I was not a good mom.

I became frustrated with both boys, with Robby absorbing the brunt of my aggravation. He became confused with his math assignment and I wasn't able to help him. When he couldn't answer basic questions about what he learned from his tutor the previous day, I felt my patience snap.

After a thirty minute lecture on responsibility, due diligence and following through on tasks, I finally threw down the papers on the table and left the room. I recognized that I had worked myself into a frenzy that was not constructive or helpful. After a walk in the frigid air to get the mail, I was able to calm down and quickly saw the error of my outburst. I still contend that my frustration with his lack of attention to detail was correct, but my demonstration was certainly not.

Although Robby and I eventually worked through his math issues, he spent the rest of the night walking on eggshells around me. I apologized for my outburst without absolving him of his own contributions. Hopefully today will be better, because yesterday is not one I am eager to repeat.

Yesterday was relatively relaxed and normal, both traits I have come to appreciate over the past year. In a world that is filled with chaos, I will embrace the mundane as a blessing. Timmy and Robby both worked hard on their studies, making huge progress towards the end of the semester. I was even able to get some work done during Circle Time which is a huge stride for Timmy.

My little Hamlet has both Circle Time and Art class today. I am hopeful to be able to answer emails during circle time, but know that I won't be able to get anything done during art. Although he is independent and loves doing the work himself, he requires constant supervision to make sure that I don't end up with my dining room looking like a glittered snow globe.

Wish us luck, and have a great day!

Our weekend was relaxed and uneventful. I spent the majority of my time cleaning, working and binging Christmas movies. Even though we didn't go anywhere, it turned out to be a very nice few days. I think I am finally adjusting to staying home (although I still miss our adventures.)

Friday night Timmy curled up on the couch with me to watch the Elf on the Shelf and Polar Express. We had popcorn and created our own movie night adventure. As usual, he chatted throughout the movie. (It is probably a good thing that he can't go to a public movie theater right now. I'm sure his constant chatter would drive other people crazy!) My goodness I love that little guy!

Last night we started a new tradition with a family gingerbread decorating party. I prepared gingerbread houses for everybody, spread candy out on a plate and gave everybody a bag of icing. With Christmas songs blasting in the background, everybody had a great time artfully decorating their house. Even Robby, who blasted the activity as "lame," ended up having fun.

Today we are back to the grind. Circle Time, academics, and work will monopolize the majority of my time. I'll be busy, but I'm getting used to that as well. Have a great week! 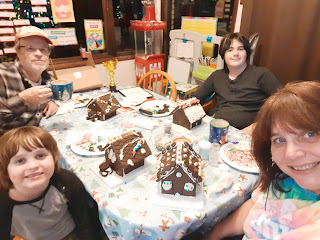 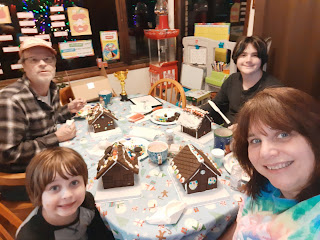 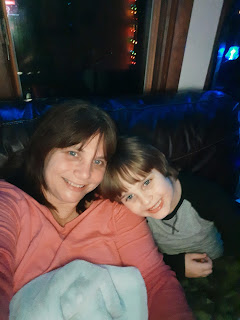