Yesterday was not our best day for virtual schooling. The optimism I felt in the morning quickly waned as I was being pulled in a dozen different directions. By lunchtime I was frayed, which was probably not the best time to start another lesson with Timmy. He was also tired and cranky from a morning of classwork and activities. Simply put, together we were a recipe for disaster.

We clashed and, before I knew it, we were both close to tears. We took a time-out to relax and regroup, and we decided it was best to put the books aside for the rest of the day. After all, school should not make you cry on the third day.

With the desk cleared, we repaired our day by playing and making up stories. After our meltdown, it was great to hear his giggles and see his smile again. I know that we will eventually get the hang of our new school day normal, but this transition is rough!

We are halfway through our first week of school and I am definitely seeing a glimmer of hope. Yesterday I only broke down in tears once, which means that I cut my crying ratio in half! I feel like we are finally figuring out a system. Although I'm sure it will take awhile to completely settle in, I feel better knowing that we are coming up with a routine. Hopefully today will see even less frustration and more learning.

Timmy is starting to adjust to school and is excited about learning. Robby, a seasoned pro, has stepped into high school with a confidence that leaves me in awe. I am so incredibly proud of him! I know that the high school curriculum is harder and more time consuming, but he hasn't complained. So far he is embracing the content and working diligently (and independently) through his courses.

School and work have been all-consuming this week, leaving little time for fun or recreation. Today I am vowing to get outside for a little while. After so much concentration, I think we all need a break and fresh air. The storms are rolling through our area later this weekend, so today may be our last opportunity to play outside for awhile.

Who knows, maybe we'll even hop into the pool!

Our first day of school can be summed up with one word: stressful. As much as I prepared and tried to organize for success, everything quickly fell apart and went wonky. I felt discombobulated and frazzled all day as I tried to juggle all of my roles.

I feel like I was moving from the moment I woke up until late into the night. Between my job(s), trying to teach Timmy and support Robby academically and managing the daily household responsibilities, I felt overwhelmed and out of my element. I tried to remain upbeat and optimistic, but inside I wanted to pull out my hear and bang my head through a glass wall.

Timmy was excited to begin school but, as the lessons continued, his interest waned. Much of his boredom was due to my scattered attention. It was hard to redirect his attention and I became more frustrated than I care to admit at his lack of focus. I'm not too proud to admit that, on more than one occasion, I ended up crying in the bathroom.

Last night I worked on our calendar and our schedule. Going forward, I'm going to try to carve out a dedicated time for school each day. Hopefully having a stricter schedule and routine will help both of us. I am juggling a lot of roles, but I can't multitask when he is actively engaged in his academics. Perhaps I need to model focus before I can expect it from him.

Robby tackled his freshman year like a seasoned pro. He began to work as soon as he woke up and never complained. He is excited about his classes, although it does seem that German may be more work than he anticipated. Nevertheless, he is excited to learn the language and is determined to put in the work.

Hopefully day will be better! 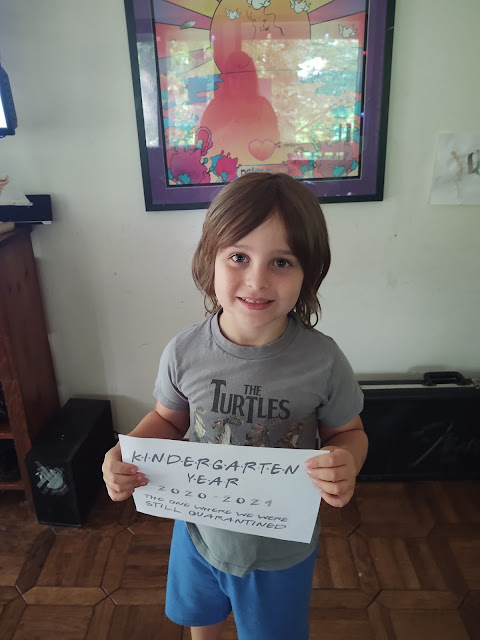 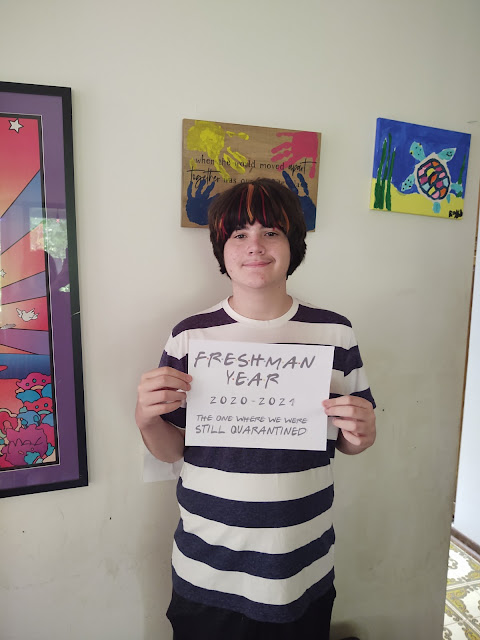 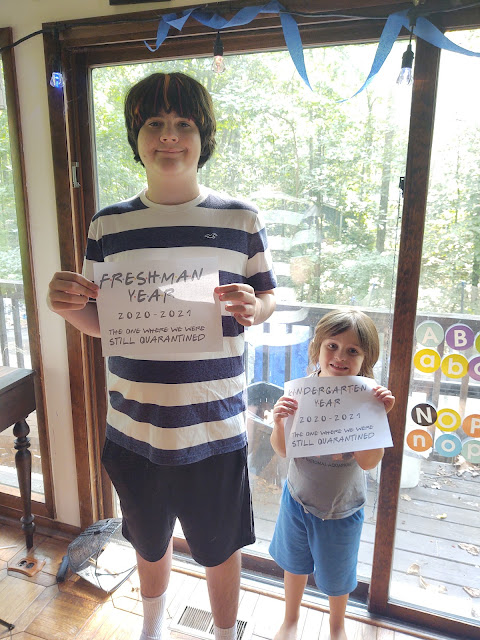 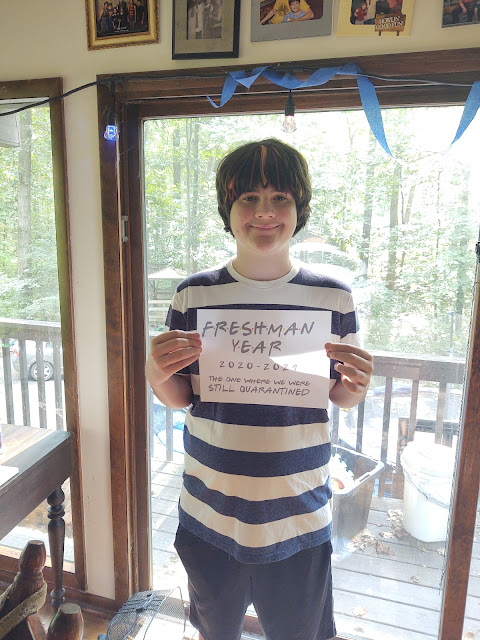 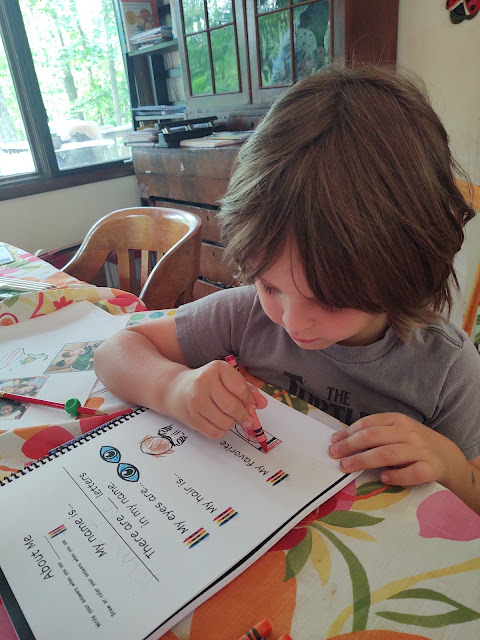 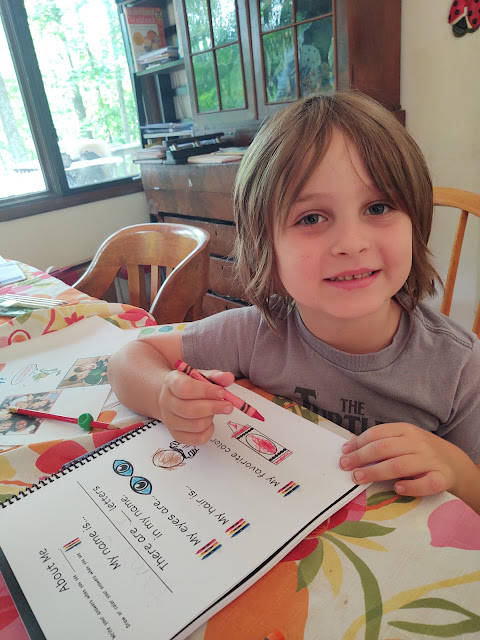 Today we are back in Virginia and ready to tackle the school year.  Although classes began yesterday, today the real learning will begin. Yesterday was busy with pretests, signing honor codes and producing getting to know you videos. With all of the bookkeeping completed, today we will dive into the curriculum.

Needless to say, I'm already feeling overwhelmed. I look at the totality of everything that both Robby and Timmy need to learn and I begin to fret. I'm doing my best to keep it day by day because if I delve too deep I fear I might drown.

Somehow, I will figure out how to cyber school both boys while working full time. I'm not sure how, but I will figure it out. Wish us luck as we embark on this new school year adventure!

We had a wonderful quick getaway to visit my Mom. Robby and Timmy were able to play with their cousins and visit with Nana. I was able to get work done, sleep in and relax. As the school year begins to wind up, this was exactly what I needed to recenter and to prepare for the impending chaos.

Friday night I did take Robby and Tiffany to the drive-in to experience a laser show. We had never attended a laser show and went without expectations. It turns out that it was quite entertaining and a great way to spend a summer evening. If a laser show comes to your area, I would recommend attending. It was well worth it!

Most of our time was spent playing outside and around the house. We really didn't do anything terribly exciting, but the kids were full of giggles and laughter. It was a fantastic way to end summer! Today we are heading home and getting all of our notebooks and supplies in order. Tomorrow, we start class. 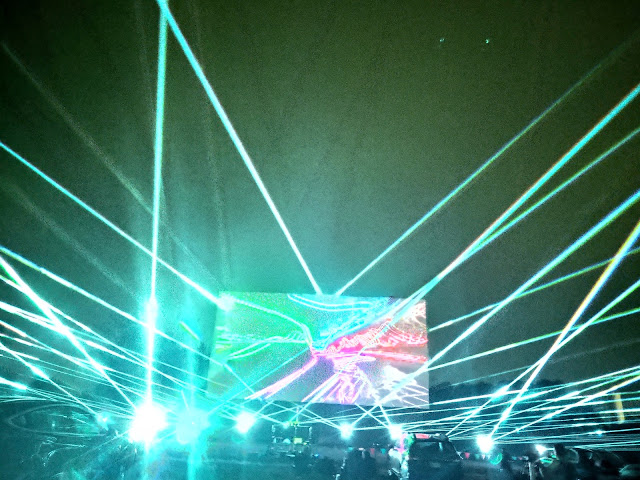 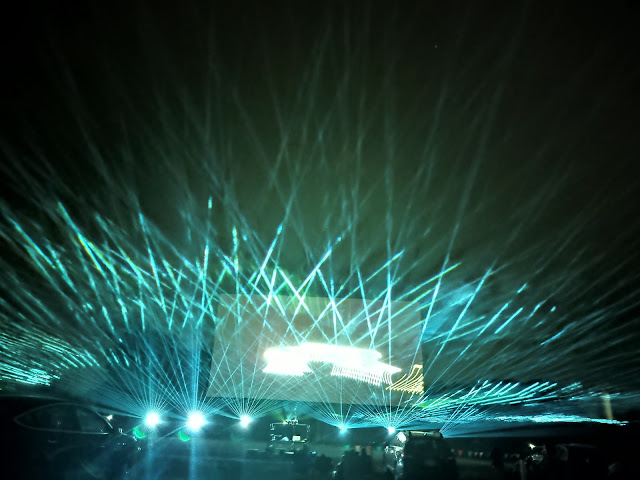 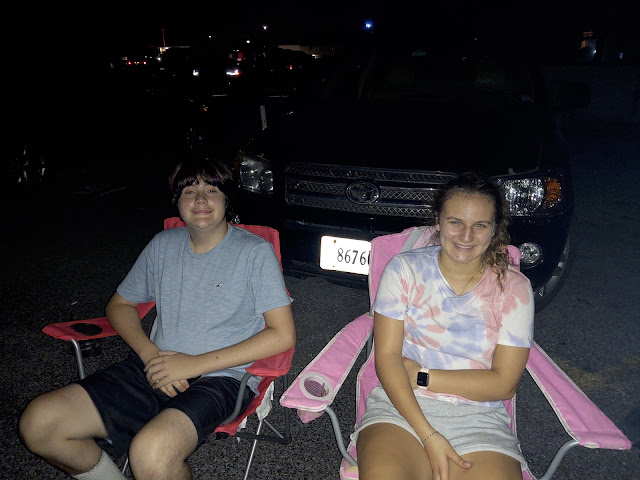