Last night Scott and I did something that we haven't done in the ten years since becoming parents.  We hired a non-related babysitter and went out for the night. After nearly a decade, we had a proper date night!

I bought Scott all-inclusive tickets to the Washington Capitals v. Pittsburgh Penguins hockey game for his birthday last month. Last night was the game, and to my surprise he wanted me to accompany him.  (The original plan was for him to take a friend, but he had a difficult time finding somebody willing to be out so late on a work night.)  Although I was nervous about the boys at home, I was able to relax and have a good time. (Of course, the unlimited wine certainly helped that cause.)

While I am not one to sit down and watch hockey on television, I have to admit that the game was fun. The excitement of the crowd was contagious, and I thoroughly enjoyed cheering and screaming along with everybody.  Scott had a great time, which was the most important because it was his birthday present.

We came home late because the game went into overtime, sending me into another panic about the sitter. Then metro trains were running late, forcing us to add nearly an hour to our travel time.  By the time we finally made it home it was almost midnight and we had been gone for almost eight hours.  Needless to say, the sitter cost almost as much as the hockey tickets, but it was worth it for a much overdue date night. 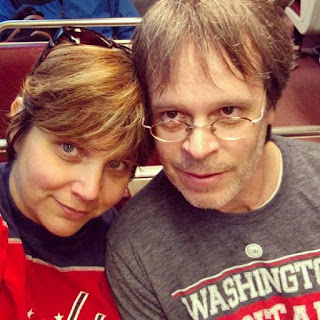 After dropping off Robby at school, Timmy and I headed to my doctor appointment. Although I do have a sore on the back of my residual limb because of socket issues, that was not the primary purpose of the appointment. I was forced to take time out of my schedule and schlep a squirmy two year old into an unnecessary appointment simply to secure medical verification that my status as an amputee has remained unchanged in the past twelve months.  Talk about an nonsensical insurance requirement!

I  can understand seeking medical feedback when a new prosthetic is required. Devices are expensive and the wrong components can wreak havoc on the body. That being said, few doctors actually understand prosthetic components enough to differentiate the appropriateness of a device. Typically the prosthetist and/or patient provides the necessary verbiage for the obligatory medical prescription. Knowing that my doctor is going to rely upon me to draft the prescription, the whole appointment tends to feel like a useless endeavor.

If my insurance adjuster wants to be picky (which is her preferred operating method), I have to visit my doctor again to receive prescriptions for liners and supplies. Again, I am asked to provide the wording for the prescriptions which I am happy to do because I at least know that they will be written to the correct standards. I tend to procrastinate these appointments, hence the reason I have a small sore on the back of my leg.

Yesterday's visit was particularly frustrating. I was on my annual quest to seek medical confirmation of my amputee status. Seriously? I have to go to the doctor every single year to document that my leg has not returned. Apparently my adjuster must believe there is a possibility I am part salamander.  Talk about a colossal waste of time, energy and money!

The cold weather snap has been wreaking havoc on more than just our newly planted flowers. My body is tired and sore this morning. My leg was doing the jitterbug kick throughout the night because of those pesky nerve jolts. When I wasn't being zapped, I was trying to find both warmth and a comfortable position.

I knew that turning on the house heat would have increased my comfort, but I became stubborn. Not only did I want to keep my leg off, but I resented the thought of being cold enough in April to turn on the heat. Silly I know, but I made an arbitrary (yet firm) decision to not use the heat again until Fall. (Robby and Timmy's room both have heat panels which we turned on so that they wouldn't be cold, yet for some reason we decided to suffer it out.)

So I was true to my nonsensical dictate about the heat, yet I shivered most of the night. I eventually fell asleep huddled under piles of covers and comforters. I felt like I needed to be unwrapped this morning because I was contorted so tightly to retain the heat.  My muscles are sore because I was curled so tightly into a ball throughout the night.

Hopefully I'll stretch everything out as the day progresses. I hate waking up and feeling sore by just moving! Getting old stinks.
at 7:03 AM No comments:

I adore my kids, but I am fully aware that they are far from perfect.  Like all kids, they can be sneaky, mischievous and stubborn (sometimes striking the trifecta simultaneously.)  I trust Robby, but I also realize that he is a nine year old boy who is prone to peer pressure and uninhibited exploration. I know that he will make mistakes, but I also believe that at his core he is a good kid.

When I find out that a neighbor has been complaining about Robby,  you can be damn sure I will confront the accuser. I want to know if my child is misbehaving, and if issues are present I will deal with it. What I won't do is allow our family to be defamed by a bored gossip monger who feels a false sense of security shielded by manipulating others into doing her dirty work.

Yesterday Mr. Bill came over and confided that a neighbor has been complaining about Robby and Jack playing outside too much. They weren't complaining about noise, but rather that they were making the stream bed muddy. I never considered that a stream bed would be free of mud, but I digress.  Instead of coming to speak with me and Scott, they decided to jump to the extreme action of securing a No Trespassing order. Again, they are hiding behind a bureaucrat instead of dealing with the concerns like polite neighbors.

While I do not relish confrontation, I will always defend my child. By the time I picked up Robby from school I was fuming. I decided to drive directly to the neighbors house, partly because I wanted to confront her with the information but also because I wanted to demonstrate to Robby that there are appropriate ways of handling conflicts. I could see her peeking through her curtains when I was driving down the street, so it was no surprise that she met me at the door before I had a chance to knock. I was livid but remained so calm I felt an oddly liberating sense of pride. In a steady voice, I began the conversation by saying, "I understand that you have an issue with my kids. I'd like to know what is going on instead of hearing second hand from all of our neighbors."

Needless to say, this individual is quick to turn everybody in for whatever violation she deems worthy, yet was not accustomed to being directly confronted. I let her him-haw about the boys venturing onto her side of the stream, rambling about worries of them muddying the creek bed by playing. I assured her that Robby has been instructed to never set foot on her property again. I promised that I would make sure that Timmy would also learn to avoid her property at all costs, and that he would never step foot on her land either.  I also reminded her that the waterway is technically public property and that the boys are permitted to be in the stream because it is not owned by them.

She was taken aback when I also stated that I was going to be posting signs along the property line so it is clearly delineated for the boys.She just nodded and stammered about not wanting to be seen as difficult or unwelcoming.  Um, too late for that one. As far as I'm concerned, we have a new crazy old lady on the street!  Before leaving, I did request that any issues with my boys be taken directly to me instead of all of the neighbors.  I offered that it puts everybody in an awkward situation and that, as a mother, I'm sure she understands the desire to deal with these issues directly. Strange, somebody so quick to pick up the phone to complain was lacking the words to converse with me.

So, today I will go outside and post "Keep Out" signs along our property line. I'm also in the market for some visually interesting yard art to decorate the stream and Robby Island, which happens to be in full view from their back deck.  What do you think?  I am open to any and all yard art suggestions (the tackier the better of course). 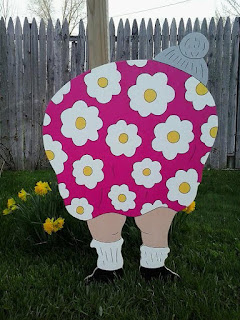 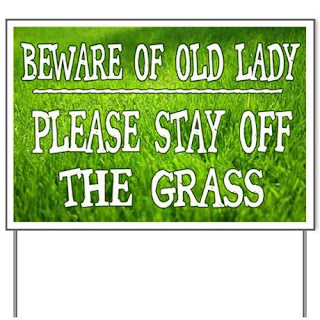 I can't say that we did anything glamorous or exciting over the weekend, but perhaps a few days of just leisurely playing around the house and yard was exactly what I needed.  Last week was stressful on many levels, and it was nice to be able to forget about all of the rejections and frustrations for a little bit. It is amazing what spending some quality time with my family does for my psyche. I'm feeling stronger, happier and ready to conquer the world.

I didn't see Robby much over the weekend, although he did make appearances for food and to go to sleep at night. I don't see him much anymore since Jack moved in across the street. The pair have become inseparable as they venture, explore and play outside from the moment they wake up until we separate the friends at night. I love that he is no longer tethered to an electronic device!

I spent the majority of the waking hours outside chasing after Timmy, who is a bundle of nonstop energy. As Mr. Bill says almost daily, little Hamlet has one speed when moving. He doesn't walk, but doesn't exactly run either. He prances quickly wherever he goes. It is adorable, and exhausting at the same time.

Last night I noticed a small sore on the back of my leg starting to form. I know that I need new liners, but I haven't had time to visit my doctor to secure the prescription. The insurance requirements which force me to secure a new prescription each time I need a standard prosthetic supply are archaic.  Having to go to an unnecessary medical appointment with Timmy in tow is frustrating, and I often put it off. Unfortunately this time I think I procrastinated a little too long, and my leg health has been compromised.

In a cruel irony, I guess now I really do need to visit the doctor.  Thanks, insurance company! I started out healthy, but your supply denials now necessitate a physician visit for more than just paperwork.