Today is the last Friday of the school year!

I can't believe that I will soon have a fourth grader. All of a sudden he looks so grown up and has somehow changed from a little kid to a big kid overnight. It seems like just yesterday I was crouching behind a fence to spy on him during his first day of Kindergarten. We have both come a long way!

Today is also our last "Adventure Friday" of the year, and we are ending the series on a high note.  Scott has planned to sneak out of work a little early and is going to take Robby to the matinee IMAX presentation of Jurassic World. Needless to say, he is excited about both the movie and spending the afternoon alone with his Daddy.

When the pair comes home from the movie, we will all pack up and head back to the pool.  Timmy is becoming quite a little water bug, laughing and splashing in his little pool boat. He finds it especially amusing when his big brother swims underneath him and pinches his toes. Scott met us at the pool yesterday after he was finished with work and remarked that he could hear Timmy giggling from the parking lot.

An added benefit of our late afternoon pool time was not expected but is very welcome. Swimming makes Timmy tired, which equates to a bedtime routine lacking in drama as well as enjoying a solid night sleep. This morning he slept until 5:00! I woke up refreshed, feeling like I was on vacation because of the extra sleep afforded by my little guy.  If this holds true, I suspect that late afternoon pool visits will become a summer family tradition.

I learned about the stages of grief in college, methodically memorizing each in preparation for an exam but giving none of them much thought. It wasn't until I experienced a profound loss, my first being the death of my grandfather, that I realized that my memorization of the stages did not do justice to the emotional roller coaster experienced by the grieving. The recent death of my father has thrust me back into those tried and true stages of grief, only I seem to be stuck in anger.

Yesterday I found myself absolutely furious with my Dad. I was angry that he failed to take better care of his health and avoided physicals out of fear that they would find something wrong. Despite our pleading for him to seek preventative care, he only went to the doctor after the cancer had cast its death sentence. I realize that it is of little consequence, but I can't help but contemplate the "what if" scenarios.

I was also upset with my Dad for very personal (some might call selfish) reasons. He dedicated the last weeks of his life to preparing his loved ones for his death. He lovingly recorded video messages for his wife, sister, his grandchildren, close friends and colleagues. I was the one behind the camera, charged with recording each message with the promise to send them to the recipient after he died. He put so much thought and love into each video that I know that they will be cherished by all who receive one.

Unfortunately, I will not be a recipient of one of his thoughtful, caring gestures nor will my brother or sister. My Dad did not record a video, write a letter or bequeath a family heirloom to me after his death. He spent his final days securing his legacy for everybody else and completely forgot about his children. I would be lying if I didn't admit that the slight hurts.

I feel petty complaining, but since this is my blog I feel safe expressing my feelings. I expected him to leave everything to his wife. My complaint isn't about his things or about money. My pain is resonating from the feeling that I have been cast aside and overlooked, which, if I were to be completely honest, was common in our relationship.

My Dad was extremely passionate about his friendships, his wife, and his work. Unfortunately he wasn't able to maintain that type of investment with his own children. I learned to accept his priorities and, while I knew that he loved me, I eventually learned to not expect an outpouring of love or support.  (I learned after he passed away that he was proud of me. While I take solace in that knowledge, it would have meant more had I heard it from him during his life.)

I wish I knew the logic behind his leaving thoughtful mementos for so many people while leaving nothing for his own children.  I know that it wasn't meant to cause pain, but was probably more just the result of another oversight.  Unfortunately I'll never be able to ask him to find out, and that makes me angry as well!
at 8:19 AM No comments:

Little Timmy is in a wonderfully inquisitive stage. You can see the wonder wash over his gleaming blue eyes with each magical discovery. From bouncing balls to throwing his sippy cups down the stairs,  he absorbs everything as if all is amazing.

The other day I was standing in the entrance of my kitchen, trying to figure out what I was going to make for dinner.  Timmy was busy tossing all of his little bowls out of the drawer and squealing with laughter as each one flew. Almost instantly he lost interest and came toddling over to me. Without missing a beat, he sat down and started to tap my feet.

He first touched my prosthetic foot before moving to my biological one. As he was switching between the two I realized that this was the first time he had actually seen my plastic foot shell. (I had just stripped off my shoe and sock to don my brand new summer sandals.) After nearly 3 full minutes of exploration, which is an eternity for a one year old to focus, I could tell that he was mesmerized and utterly confused.

While I'm sure that this was the first of many observations, it was the first time Timmy realized that my prosthetic is different than my biological foot. I just loved standing still, watching him explore my feet as he tried to piece it all together. Thankfully my camera was in my pocket, allowing me to shoot a short video to record the discovery.

Something is different...
A video posted by Peggy Friedman Chenoweth (@amputeemommy) on Jun 8, 2015 at 9:02am PDT

Last week I was surprised to receive a voice mail from a reporter for People Magazine. While I was fairly certain that the call was not announcing that I have been named to the 100 Most Beautiful list, I was intrigued enough to call back. It turns out that the reporter was doing a feature story on Adrienne, the dancer who lost her leg in the Boston Marathon bombings.

I met Adrienne last month when I testified in front of Congress.  Although our journeys have been different, she expressed a willingness to use her platform to highlight the real life issues faced by amputees. In particular, she wanted to help fight for insurance fairness and prosthetic parity.  It turns out that she was good to her word because she managed to use her clout to convince People magazine to address this issue.

I was delighted to add my voice to compliment the article.  I was able to speak to my own personal issues battling insurance and highlighted the plights experienced by far too many of my friends. The reporter appeared to be both empathetic and outraged by the issue, leaving me with hope that the community has won another ally in our battle.

Saturday morning I received an email announcing the release of the People article online. I remain awestruck that I have been quoted twice in People magazine! I'm optimistic that this article will be the tipping point that our community has been seeking as we try to raise awareness about insurance fairness and access to prosthetics.

Between running errands and working around the house and yard, the weekend just flew away. It is hard to believe that we are facing another Monday, but considering that we only have one more left before summer vacation, I think we will all survive. We are definitely in the home stretch, and at this point I'm not sure who is more excited.

Robby is delighted to be finishing up another school year.  He "graduated" to the fourth grade on Friday, providing some closure on the school year despite the fact that he has eight more days of classes.  I was so proud of him as he recited his speech and played his piano songs for the audience. (Considering that the audience was comprised of his teachers, two other parents, Scott, my Mom and myself, he had a lot of support!) I know that he was nervous, but he was able to gather his courage to take the spotlight.

After the recital I took Robby and his friend, along with my Mom and Timmy, to lunch. We should have known better than to allow Robby free reign while choosing.  We ended up at a mediocre yet overpriced all-you-can-eat buffet. Definitely not my choice, but seeing the delight on my little Koopa's face was worth sacrificing both the money and a good meal.

Robby and his friends thoroughly enjoyed the buffet, gorging on everything from chicken legs to ice cream.  By the time we rolled out of the restaurant, they were both stuffed, happy and covered with crumbs and food. While the friends were bingeing, my Mom and I were occupied with Timmy. It turns out that the little guy is quite a fan of marshmallows, which are not only sweet to munch but sticky and fun to smear over everything. After he was thoroughly coated in gooey sugar, my Mom took the opportunity to head home.

I tried to hose Timmy off in the bathroom to no avail. No matter how much I tried to wash off of him, he resembled fly paper in that every single part of his body was sticky. I finally gave up cleaning him at the restaurant and strapped him into the car seat despite being fairly certain that the sugar glue would keep him in place through any sort of collision.  On the positive side, we introduced a new food and he wasn't allergic! 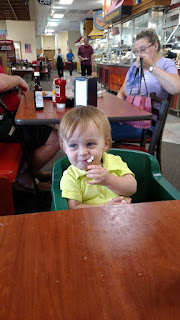 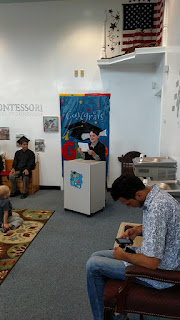 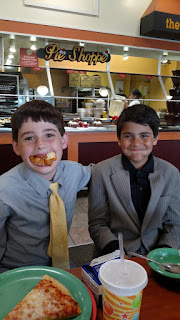 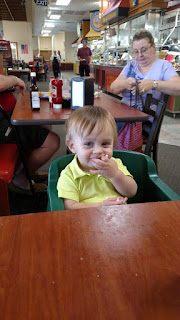 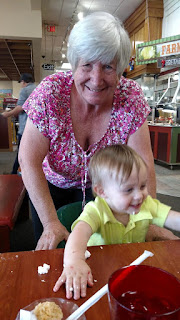 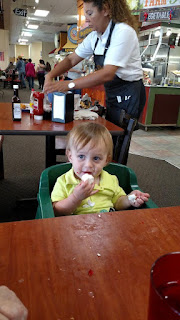