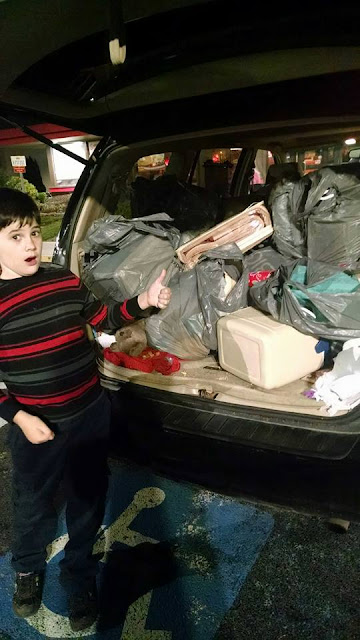 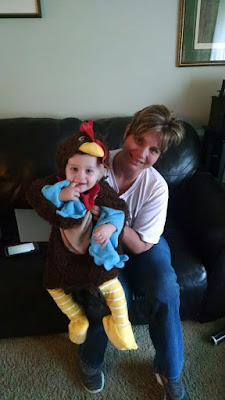 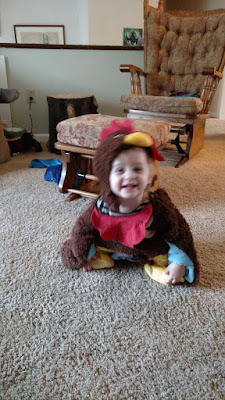 Scott arrived late yesterday evening, after driving over four hours for what should have only taken two hours. So much for his plan of avoiding the travel rush by leaving a day early! Needless to say, he was frazzled, hungry and drained by the time he pulled into my Mom's driveway.

Robby was thrilled to see his Daddy, relaying every detail of our military museum adventure.  He eagerly demonstrated everything that he learned, and proudly showed off his souvenirs. I'm so glad that the museum was a hit with my little Koopa!

Today will be spent getting ready for Thanksgiving. We are all going to help my Mom cook, clean and organize in preparation for the family crowd that is expected tomorrow. It will be hectic and busy, but fun as well.

I love Thanksgiving!
at 6:56 AM No comments:

Yesterday Robby and I bundled up and headed out for our special adventure. My Mom offered to watch Timmy, which allowed me to give my full attention to Robby. I knew that we were going to be busy, but I underestimated the level of activity required to conquer the Army museum. Decked out in his Air Force leather flight jacket and snoopy hat, I knew that he was ready for the adventure.

The Army museum was, to quote Robby, simply amazing. My little Koopa loved every moment, smiling from ear to ear and talking nonstop about every exhibit. We were assigned a docent when we entered, a retired Vet whose job was to get us started in the exhibits. He ended up staying with us throughout because of Robby's continual narrative and peculiar questions.  He remarked numerous times that he was impressed by both Robby's knowledge of military history and his interest in details.  Needless to say, Robby was on Cloud 9 knowing that he impressed the guide.

We thoroughly enjoyed our military themed adventure, and I have no doubt that we'll be back soon. Robby is already asking when he can return, and wants to bring his Daddy. He is sure that his Daddy won't need a docent because he is an excellent tour guide. (I'm fairly sure he is correct.)

Robby wasn't the only one to have a fantastic day. Nana took the opportunity to spoil Timmy by taking him to Toys R Us. When I came home, he was busy bouncing in his own inflatable ball pit.

What a great start to our Thanksgiving vacation! 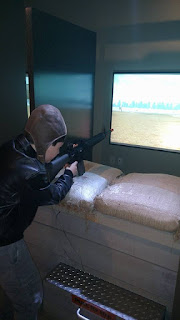 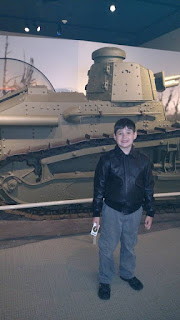 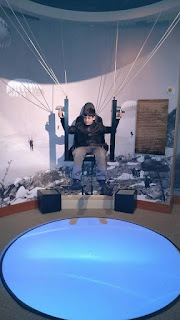 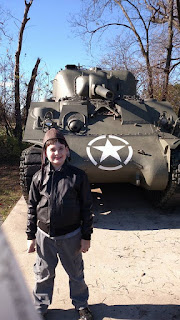 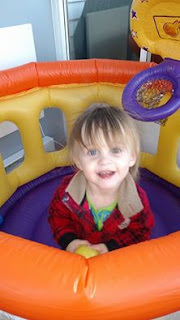 The boys and I made our traditional pilgrimage to spend the week with my Mom. Scott will join us on Tuesday when he is done with work. In the meantime, I have a few adventures planned (in between resting and relaxing of course.)

Today Robby and I are going on a special trip to the War College in Carlisle. My little Koopa has become quite the history buff and has recently become enthralled with World War II.  I must admit that I was a bit taken aback when his interest in World War II started to grow.  When I saw that one of his drawings from school featured a Nazi flag, I knew that I had to intervene.  I know that zooming planes and torpedo boats are fun for little boys, but the horrific atrocities needed to be appreciated.

I grew up with a Jewish father who made sure that we understood and appreciated the history of the holocaust.  After much searching, I found a kid-friendly documentary on the holocaust, and I sat him down a few weeks ago and made him watch the film. Unlike so many documentaries about the atrocities committed, this film was not graphic. However, it did enlighten Robby about the crimes committed and the torture endured during that time.

After watching the documentary, Robby's interest in World War II was solidified. (Thankfully now the only time he draws the Nazi flag is on the tail of a plane violently crashing.) While I don't understand his fascination with all things military, I love that he is a little sponge soaking up as much information as possible. I know that he is going to love learning about all of the different wars and seeing the artifacts in the museum. It should be a fun day!