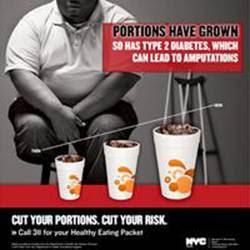 At first glance, this public service ad is seemingly benign because promoting diabetes awareness is a cause I wholeheartedly support. With 507 new amputations occurring every day in this country, trying to increase an understanding between diabetes and limb loss is a noble cause.

However, after reading the accompanying article, I became disturbed by the photograph on the ad. I learned that the amputee on the ad is a PhotoShopped image. The model has both limbs and one was digitally removed for this picture.

I realize that images are digitally altered and enhanced as part of a normal editing process. Real life celebrities rarely resemble their photo images because PhotoShopping has become such an accepted norm. Despite the pervasive altering of images, I find this particular digital "enhancement" abhorrent.

There is an assumption that individuals portrayed on advertisements for "causes" have actually been directly impacted by that which they are promoting. I assume that the women featured on breast cancer commercials, touting to be survivors, have been diagnosed with breast cancer. I don't question the authenticity of these individuals because feigning such a devastating event would be in poor taste and would seem contrary to the awareness-raising endeavor. Using a bi-legged model and digitally removing a limb to create an amputee reeks of insincerity!

There are thousands of diabetic amputees throughout this country who would have been honored to participate in this awareness campaign. Why was somebody chosen who has not been impacted by limb loss to make the poignant connection between diabetes and amputation? With an active amputee community chomping at the bit to educate and to reach out to others, the effectiveness of this ad has been compromised by ignoring the population it is trying desperately to reach! In my opinion, using somebody who has actually experienced this complication would have been more effective and less insulting.
at 4:57 AM