Like so many other people, I have struggled with self-esteem issues periodically throughout my life. High school was a particularly difficult time for me as I was the recipient of taunts, nasty comments, and teasing by the run of the mill group of popular "mean girls." Graduation from high school was a joyous event for me--not because of the achievement but because I wasn't going to have to see any of those people again!

My self-value began to heal through college. I had, and still maintain, a tight group of friends whom I cherish. I was a confident and happy person before my foot was injured. The accident and subsequent amputation not only took my foot but also destroyed my fragile self-esteem. In many ways I felt like the scared, inadequate feeling girl from high school.

There were days when I didn't want to get out of bed (and more than I would like to acknowledge when I succumbed and hid under the covers all day). When I realized that I couldn't hide from my reality, I opted to eat my way out of the despair. That didn't work either. I simply ended up being an unhappy, obese amputee.

It has taken time, introspection, and hard work for my self-esteem to rebuild. After eight years I can finally say that I am happier than I ever imagined possible during those dark days when I was a girl in high school and hiding under my covers with a Snickers bar after my amputation.

Even though I feel as if I have healed from my emotional baggage, part of me continues to resent those "mean girls." I have been told that living a good life and being happy is the best revenge. While I agree with that sentiment, I have found something more satisfying. Old-fashioned, take a look at me now success! 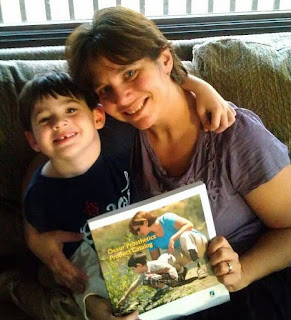 I'm a cover girl! A photo of Robby and me has been chosen to grace the cover of the Ossur Product Catalog for 2012. I was the girl who was called fat, ugly, worthless, stupid, and unlovable. I tried to hide from the world because I thought that I had lost my beauty, my talents, and my ability to be happy when I lost my foot. It feels surreal that I am now featured on the cover of a major prosthetic company's catalog. Who knows, I just might go to my high school reunion next year-- with the catalog in hand of course!
at 5:02 AM