Yes, I have one of THOSE children...

Scott and I have made an effort to expose Robby to a variety of cultural experiences since his birth. We have been to the circus, numerous Wiggles Concerts, fairs and festivals. My five year old niece Tiffany had her end of the year dance recital on Saturday. I decided that it was the duty of a good Aunt to attend and rationalized that it would be a good "cultural experience" for Robby.

Robby, my Mom (his Nana) and I piled into the car and drove to the ballet recital. We griped about the tickets costing $15. That is a lot to watch a bunch of five year olds dance a bumblebee dance for three minutes. We also discussed the irony that Tiffany was a bumblebee considering my experience being Queen Bee earlier in the week.

My sister and Tiffany were busy backstage when we arrived. We met up with my brother-in-law with my two nephews, age three and two, in tow. They were planning to sit in the front of the auditorium. I opted, with my Mom, to sit in the back row. I needed an accessible escape route should Robby become restless.

The performance started, and Robby was mesmerized- for about 2 minutes. After the novelty of the environment wore off, he began to chatter. The more I reminded him to speak softly, the louder he became. We were drawing the attention of the other ballet patrons. I quickly realized that we were situated right next to the audiovisual recording equipment. I decided to move.

As I see it, Robby had two main advantages over me. He has two feet and he is small. He could move more quickly than I. He also has the ability to maneuver through very small obstacles and through small aisles. The deck was stacked against me.

Initially he was happy dancing in the back of the auditorium. Then he decided to start spinning. Then he combined spinning and running. I knew we were in trouble when he started to roll.

Loudly, Robby began running between the aisles, squealing "wheeee." He was having fun and, trust me, everybody in the auditorium knew it. I tried to catch him.

He was ducking between seats and through the aisles. My prosthetic kept kicking and getting caught on the auditorium chair legs. I was wearing my Proprio ankle, which is wonderful for everyday activities but is not meant to sustain a lot of impact activities. Running after a three year old is definitely an impact activity!

My receptors in the prosthetic couldn't respond quickly enough to keep up with my running, so my ankle movements were always a half a step behind. This was causing me to stumble and slowed my speed. I ran into the arm of a chair with my thigh. Robby was giggling with delight.

Robby's behavior continued to draw attention from the audience. It is no wander they were staring. He was screaming "wheee" as he was being pursued by a frustrated and angry one-legged limping Mommy. I looked to my Mom for help. She was laughing too hard to be of assistance.

Finally, I managed to grab him. Screaming, I carried him out of the auditorium. We spent the remainder of the dance recital in the lobby. Robby made a fort under the refreshment table and occupied himself pulling old gum off the bottom of the table. I was able to watch my favorite little bumblebee dance through a crack in the auditorium door.

Most of the time my husband and I are extremely proud of Robby's behavior in public. He is usually a very sweet little boy. Every once in awhile, he does something to remind us that, although he was born 5/30/06 his due date was really 06/06/06. 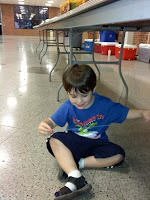 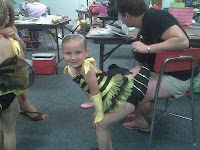