I have always loved St. Patrick's Day. Truth be told, I throw myself into just about every holiday. Until I was in the 6th grade, I used to sign my name as "Peggy O'Friedman" on the top of my school papers every March 17th. I wore green from head to toe, and became a down right bully when it came to punching those whose green was not highly visible. My Mom used to always make green mashed potatoes and a pistachio cake for dinner.

Scott has requested that I stop dyeing food. I feel obligated to honor this request since he is such a good sport when it comes to a lot of my whims. He has dressed like an elf for our family Christmas photo and wears bunny ears without complaining every Easter. For a reason which I do not understand, he does not find festively colored food palatable. Instead of green mashed potatoes, I will make green pancakes for breakfast.

My holiday celebration won't end with breakfast. I have been planning a Leprechaun visit for weeks. In an attempt to ready Robby, a Leprechaun visited our house left week. He left a mess in the bedroom during the night, but also left a model plane suspended from the ceiling.

Robby and I have made leprechaun traps in order to catch one of the little troublemakers. We 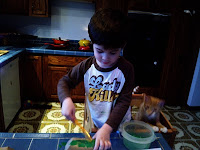 don't want to hurt the little guys, we just want to meet one and ask him to stop causing so much havoc. We opted for small paper boxes, courtesy of our local Five Guys burger stand, held up with a stick. The boxes have been colored green (the leprechaun's favorite color) and have been strategically placed around the house. We even baked the leprechaun's favorite cookie, gooey shamrock drops, to lure the little men into our trap! 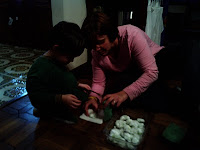 Robby is absolutely convinced that we are going to be successful 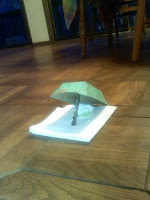 catching a leprechaun. I, however, am not so certain. I have a sneaking suspicion all that will be left in the trap is a pair of miniature Leprechaun wooden shoes, courtesy of my Dutch Aunt!

Although the chances of us catching a leprechaun are minuscule, I am 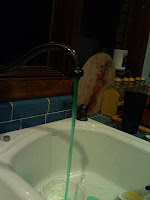 certain that their visit will be well documented throughout the house! The water in the toilets will be green, and Robby's morning milk will probably suffer the same fate. I can hardly wait to see Robby's face when he turns on the kitchen sink to discover that the water is green! (I have been secretly experimenting at night to see if this leprechaun magic is feasible.)

I have spent the last two days cleaning and scrubbing the house, so I am doubtful that the leprechauns will cause too much of a mess. However, I won't be surprised to see a trail of pennies leading to various surprises throughout the house. I am sure that the little rascals will probably end up overturning a chair or two as well.

Robby and I are excited about the impending leprechaun visit. He has mentioned trying to "sneak up and surprise" a leprechaun in the middle of the night. I've tried to explain that, just like Santa Claus, Leprechauns only come when you are asleep. Thankfully, he is only three and believes me completely, and he still believes in magic!

I hope that you have fun trying to catch a Leprechaun today! Don't forget to wear green, or else you risk being punched by an overzealous holiday freak like myself. Happy St. Patrick's Day.
at 4:52 AM