It's raining, its pouring. While Scott was snoring... The troubles begin when the rain falls in... and the ceiling came down in the morning.

Last week it was raining inside my living room around the fireplace. My roofing cousin came down and fixed the flashings, recaulked, and deemed the roof weather ready. Unfortunately we failed to have him look around the skylights in our bedroom. As we learned at about 4:30 yesterday morning, at least that part of our roof was not rain ready.

The storm that we had was strong. It actually woke Robby up, causing him to come sprinting into our room and dive bomb under the covers. Just as the little Wiggle Worm next to me began to settle down, I heard it.

Drip. Drip. Drip. My heart sank as I heard each falling water droplet. I tried to localize the sound when I felt a little tap on my shoulder. "Momom. Do you hear that? It's raining inside the house."

Robby's statement made Scott jump out of bed and scurry around the bedroom. It didn't take long to locate the problem. The ceiling in the bedroom was leaking around the skylight.

Before I had time to protest, Scott was on top of my pink stepper with his beloved drywall saw in hand. Piece by piece chunks of my ceiling were being cut away. We now have a large hole in the middle of room, drywall pieces and chunks everywhere (because he never thought to put down a tarp before he started hacking away) and every towel being used to sop up the water.

I moved the soggy drywall pieces that were littering the counter so that I could grab a cup of coffee. I slurped it down, trying not to watch the zealous ceiling destruction in front of me. I was relieved to have to leave the house for my Dexa scan. 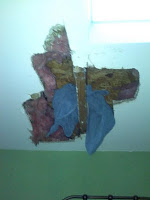 By the time I returned home, the hole in the ceiling had grown, but the location of the leak was located. We went to Lowes for the recommended caulk. I wanted to read the instructions, but was quickly overruled. After 45 minutes he climbed off the roof with tar covered hands and an empty caulk tube. We were optimistic about his efforts.

I was on the phone with my doctor learning that I have been definitively diagnosed with osteoporosis (on the mild side of moderate) when I felt a drop of water hit my nose. The troublesome leak was back, and I have osteoporosis. I am not a happy camper!

After reading the back of the empty caulk tube, I noticed that it needed at least 3 hours to set before it could get wet. It was only on the roof for 90 minutes before the rain returned. We don't know if we were unsuccessful treating the leak, or if the caulk had been applied in the correct location but didn't work because it hadn't properly set. Home repairs are not our strong suit.

We are going back to Lowes today to get yet another tube of roof caulk. Then we are swinging by the pharmacy to pick up my bone building medication and calcium supplements. I think a trip to the bakery might also be in my future. I have a gaping hole in my bedroom ceiling and osteoporosis. My chocolate cake is now medicinal. After all, doesn't chocolate contain calcium?
at 4:39 AM