I have been prepping Robby for Mother's Day all week. He knows that he has to be a "super good boy" today. Last night, after Robby was tucked into bed, I grabbed my pillow and said goodnight to Scott. I headed downstairs to sleep, leaving Scott with all "monster chasing" responsibilities for the evening. I decided that I was going to sleep in!

I took a brief detour in the kitchen write down my favorite drink order from Starbucks. The menu does get confusing, especially for a coffee novice. I have learned years ago that Scott responds best to a direct approach, subtle hints are lost on him. Starbucks is such a treat for me that I didn't want to risk the order being wrong.

I woke up this morning to the pitter patter of Robby's feet in the kitchen above me. I heard Scott urging Robby to be quiet as they "snuck" out of the house. Success! My Starbucks hint worked. I stayed in bed and watched "Good Morning America" as I awaited my doting. Quiet time in front of the television and control over the remote is a rare luxury!

I turned off the television as soon as I heard the car pull into the garage. Robby came bounding downstairs, and then he began to blow his penguin whistle to wake me up. "Good Morning Momom. Hurry up. We have a big surprise for you! Hurry Momom hurrrrryyyyyyy!"

Upstairs I was presented with my large non-fat, two sweet n' low latte. How did they know that was my favorite! Robby also handed me a chocolate doughnut. He proudly showed me his sprinkle laden concoction that he talked his Daddy into at the grocery store. 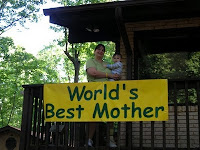 On my first Mother's Day Scott commissioned a large banner that says "World's Best Mother." This banner is now hung every year from our deck, so that my mothering superiority can be declared to all of the families in our neighborhood. Just kidding! Even though I know it will be hung, the site of the banner always warms my heart.

I hope that all of my AmputeeMommy friends and family have a wonderful Mother's Day. Being a Mommy is a lifelong job, with no retirement or layoffs. It is a job without vacation time or sick days. We are not paid in money but in kisses and hugs, in giggles and carefully plucked dandelion "pretty pretty" flowers. Motherhood is the greatest adventure in the world. 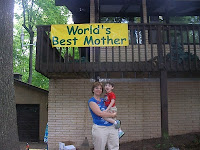 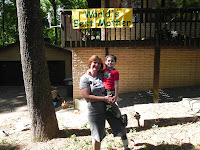