Not Worth the Price

A few weeks ago I met with Elliot, my prosthetist, to discuss my liner issues. I love the practicality of the seal-in liner I have been using because I'm able to simply step into the socket and walk. My biggest complaint with the liner involves the fit. It is a cylinder shape that does not accommodate for a "shapely" thigh. The liner consistently rolls down my thigh, and it drives me absolutely crazy.

I have tried several stop gap measures to fix the rolling liner problem. I've cut a wave design in the top of the liner which was moderately successful. Unfortunately, as the liner becomes worn there is nothing that keeps it in place on my jiggly thigh.

I have gotten into the habit of simply folding the liner over the top of my socket. Folding the liner eliminates the uncomfortable liner roll which interferes with the bending of my knee. Unfortunately, the liner sticks to my pants and skirts when it is folded over. I have also discovered that the durability of the liner is compromised by folding it over the socket, lending itself to developing holes and tears.

I have complained about the liner shape to everybody who would listen. I had the opportunity to meet some research and development specialists from Ossur several months ago, and my liner woes were at the top of my list. I have been assured that an improved shape is in the works, but that certainly doesn't help me now.

Elliot has heard my complaints about the rolling liner for years. He invited me to try a new liner, manufactured by Evolution Industries. The Origin liner is a new seal-in liner that is touted to stay in place. I was psyched and ready to give it a try.

The Origin Liner is a two part system. The first piece is similar to the common silicone liner that is used for sleeve suspensions. I was impressed the first time I rolled the new liner onto my limb. Although it was thicker, the material was smooth and comfortable. The conical shape worked its geometric magic as the liner did not roll down my thigh.

The second part of the liner is similar to a prosthetic sock with the addition of a seal. It was simple enough to slip on, although to be honest I wasn't thrilled with the extra step. I suppose I have become lazy when it comes to putting on and off my leg. I don't need to wear prosthetic socks anymore and I have become spoiled with the "get up and go" system I have been using.

If I had written this blog after the first day in the liner, my report would have been glowing. I loved the fact that it stayed in place. Once I trusted that it would not roll down and stopped walking stiff legged in order to thwart movement, I found walking to be easy. The suction was strong and I was thrilled.

After the first day, my experience started to go downhill. The liner left my limb cherry tomato red after a few hours. I found that I was constantly releasing pressure in the socket to provide relief. The thick material was impeding my ability to kneel down and squat.

On the third day I abandoned the new liner altogether. I developed painful and bloody sores on my knee along the line of the liner. My leg was stinging whenever the liner was removed and my limb felt like it was burning when I rinsed it off. The discomfort and skin breakdown was not worth the "luxury" of a liner which stayed in place!

With the "new" liner by the wayside, I set out reconfiguring my seal-in liner. Since it was already riddled with holes, I knew that there was little damage I could inflict to make the situation worse. I opted to cut the length significantly so that the liner ends just below my knee. (I suppose I could have taken more care to cut a straight line, but I was frustrated and looking for a solution.) 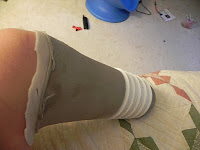 I have been thrilled with my liner since I made this adjustment. My knee is completely free, allowing for full mobility of the joint. I no longer have to worry about the liner rolling down, or creating an unsightly fold over my socket.

I have been in the seal-in liner for several years and have been complaining about the issue for as many years. I spoke with researchers for the prosthetic company and various prosthetists about the issue. Despite all of the expertise I solicited, nobody was able to solve the problem. The solution was so simple! Why didn't I think of this earlier?
at 4:04 AM