I love spending time with Scott and Robby, but left to their own devices, our day adventures would be limited to the Animal Park, Best Buy and GameStop. I wouldn't say that I dislike browsing the aisles of electronics stores for what feels like an eternity, truthfully I downright detest it. I don't understand the lure of looking at game boxes and studying components for devices that we do not own. While I share Robby's affinity for the Animal Park, we have been there 7 times since it opened three weeks ago. This past weekend I wanted to do something different, something of my choosing.

After quickly searching through my inbox full of daily deals, I located what I thought to be the perfect destination. A small town about an hour away was hosting a tulip festival. Touting a "sprawling pick-your-own field" along with a chainsaw artisan providing demonstrations, crafts for the kids, lectures and fun and games for all, I thought I had devised the perfect plan for the day. To my surprise, Scott and Robby didn't complain (too much) when I informed them that we would be spending the day at a tulip festival.

Sunday morning I grabbed my Groupon and we all hopped into the car on our quest for tulip-themed fun. After driving for nearly 90 minutes (Mapquest lied), we pulled into the parking lot for the festival. Apparently we have a different definition of "festival" than the organizers of this event.  We took the term literally, whereas the tulip farmers took a more liberal use.

The "sprawling field" turned out to be a small garden plot. The tulips were indeed beautiful, but it certainly didn't take long to tiptoe through the field! Despite the disappointing size, Robby seemed to thoroughly enjoy picking my flowers: yellow and red of course.

The promises on the website of hours of fun for the whole family never materialized. There were no chainsaw artisans; the crafts for kids ended up being nothing more than a box full of broken crayons placed on a card table. After picking my bouquet of flowers, we loaded back into the car and drove home.

To say that the Tulip Festival was anticlimactic would be an understatement. It was so contrary to what we expected that it became fodder for a running joke between Scott and me during the hour and a half drive home. Both of us were in hysterics when we passed a new attraction about 5 minutes from our house: a pick your own tulip field. 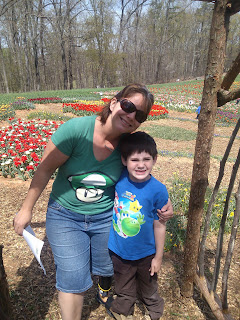 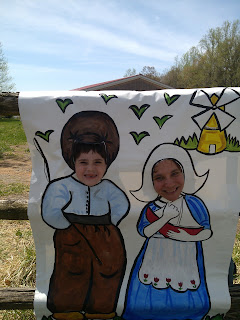 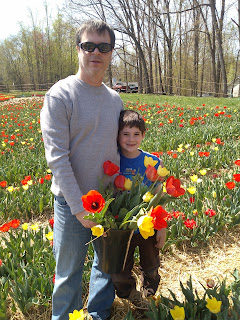