It never ceases to amaze me how my life has transformed since my amputation. I wouldn't say that my life is better or worse, but it is certainly different. I am different.

I have always considered myself to be fun loving. I have always enjoyed spending time with my friends, meeting new people, laughing and acting silly. These attributes have remained unchanged since the amputation. I am sure that my friends would agree that I have never been extremely daring or physically adventurous.

Sky diving, rock climbing and other physical feats have never been my cup of tea. Although not inactive, I preferred more conventional activities such as hiking and karate which did not run the risk, perceived or real, of life threatening injury. As I've written before, I am not now, nor have I ever been, considered graceful or coordinated!

Although my grace and coordination have not improved, I have become more physically adventurous. I am not sure if this shift stems from a desire to prove to myself and to others that amputees are capable, or if it is a result of the realization that life is too short to remain on the sidelines. Perhaps it is a combination. I do know that, since I have become an amputee, I find that I want to do things with one leg that I never considered doing when I had two legs.

While on vacation I decided that it would be fun to parasail. In the past, I have never had the desire to be strapped to a parachute and pulled by a speeding boat. Much to my husband's chagrin, I announced that I wanted a parasailing adventure.

I was nervous that the operator would not let me parasail with only one leg. The possibility of my losing my leg at such a high altitude necessitated my engaging in the activity without my prosthetic. I was put at ease when the Captain told me that, not only would I be able to parasail as an amputee, that the whole family could go up together.

A family parasail adventure. I was excited. Robby was excited. Scott was accommodating, but certainly not thrilled.

Robby was excited when we told him that we were going to go up in the "big balloon." To his delight, the parasail unfolded into a large yellow happy face when inflated. He was going to go "up up high" in a large happy face. For a three year old, it didn't get any better.

Parasailing with one limb required few adaptations. Unlike to the other passengers, my amputation necessitated us to launch and land from a seated position. This was the only accommodation.

I was surprisingly calm before we were launched. After the initial nervous jitters, Robby enjoyed the ride. He started to point to landmarks he saw from the air, and he seemed to love being dipped into the ocean. Before I knew it, our ride was over. and we were landing on the boat. 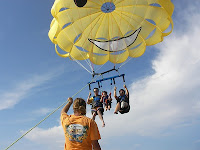 I have decided that I would like to compete in a triathlon. A triathlon was not even on my radar of "things to do" before my amputation. Now I want to complete the race to prove something to myself. A triathlon is, to me, the ultimate test of physical endurance. I am not going to compete to win. For me, finishing will be the ultimate prize.
at 4:12 AM