Yesterday was an exciting one in the Chenoweth Virtual School. Timmy, learning about early colonial life, discovered making butter. He was absolutely amazed that a little bit of a cream in a jar will transform into butter when shaken. I made bread with dinner and we all gobbled up his "magic butter" as we ate. He smiled from ear-to-ear as he watched us enjoy his creation.

After discovering that butter is something that can be made, Hamlet declared that we are never buying butter again. He must have meant what he said, because when I was busy on a conference call he emptied all of the butter into our trash can. I discovered his efforts when I was cooking dinner and opened the lid of the trash can to throw away some scraps. Laying right on top were 15 sticks of butter, removed from their boxes and discarded.

Obviously, I rescued the butter. (It wasn't soiled and was laying on top of some old papers, so I'm not worried about contamination.) I appreciate Timmy's enthusiasm, but he doesn't understand the cost value of buying butter over churning his own.

It's safe to say that we will be making butter again. 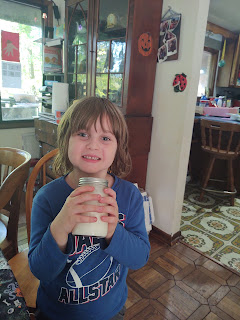