I woke up yesterday morning resolved to overcome my fear of riding the bicycle. I told my family and friends my plans. I wrote about it on my blog. I made my resolution public because I wanted the avoid the possibility of giving up and not trying. If I didn't attempt to conquer my fear, I knew that I was going to have to write about my failure in my blog, or lie and tell everybody that I was successful. I vowed to never lie in my blog so I knew lying was not a viable option.

As the day went on, my nerves started to increase. Logically I knew that I had built up the fear to a paralyzing level. I also knew that it was something that I needed to accomplish for myself.

My Mom called several times to see if I had ridden yet. My mother-in-law asked if I was successful. My sister called to tell me that she was proud of me. These calls all occurred before I even attempted to ride. I knew with all of the support I received, I had no choice but to try.

Scott disconnected my bike from the trainer stand. He pumped the tires with air and found my helmet. In the meantime, I went through my purse and found my medical insurance card. I put $20 in my pocket for the hospital co-pay. I called my Mom for a last minute pep talk, and I went outside.

Robby was eager to get on his bicycle next to Mommy. Seeing him standing next to me, wearing 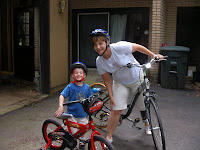 his helmet and a huge smile, provided me with the motivation I needed. I looked into that sweet little face, and I knew I had to try. He was so excited to go on a bike ride with Mommy; I just couldn't let him down.

After last minute jitters and some anxious moments as I tried to adjust myself on the bicycle, I started to pedal. To say I was cautious would be an understatement. Scared stiff would be a more apt description. I rode to the end of the driveway, but I felt like I had just won a stage in the Tour de France.

Scott and Robby got into the "team car" and drove behind me as I cruised through the neighborhood. It was invigorating feeling the breeze through my hair as I rode. Turns and corners still cause me anxiety but I'm sure that will subside with time.

I am proud to report that I overcame my fear by riding my bicycle outside. I am going to continue riding my bike through the neighborhood. I'm sure that I will still be nervous, but I won't be terrified. I know that the fear will lessen with each ride until it is a memory. However, I will continue to keep my insurance card and co-pay in my pocket.