Robby and I ventured into the hot weather only once during the past weekend. Mr. Bill thought that the Civil War reenactment camp would be a perfect location to sell his cannon ball remnants. Saturday afternoon we piled into the car and headed back in time to visit the Civil War at the Battle of Bull Run/Battle of Manassas.

Luckily I have a handicapped tag which saved us the hassle of parking three miles away and paying the $20 bus fare. We were able to park directly in front of the festivities. Typically I feel bad taking advantage of the "perks" afforded to individuals with disabilities. With the heat index in the 120s, I have to admit that I didn't feel even a twinge of guilt! I happily parked, hung my tag and smiled as we walked the 20 feet to the entrance.

Robby and I began to explore the grounds. He was enthralled by the soldiers in their uniforms. Actually, he was more interested in the swords and guns that were being toted by the soldiers.

Finally Robby got his courage to go up and talk to a participant. The man was generous with his time and attention. He even dressed Robby in a spare uniform to pose for a picture.

Once Robby realized that he was allowed to try on costumes, it was game on. We went 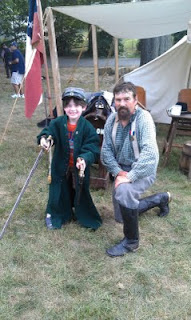 to every tent in the compound, introducing ourselves and posing for photos. Robby was in his element with the reenactors, and was certainly charming. One man even let him assist with the firing of a cannon! I am beginning to suspect that between his enthusiasm in front of the camera and his propensity for wearing costumes, I might have a budding theater major on my hands!

I enjoyed speaking with the reenactors. I was most surprised at the efforts these men (and a few women) go through to maintain authenticity. One gentleman was seated for the picture with Robby. It turns out that his foot was stomped by a horse earlier in the day, but he refused to go to the hospital because, although he knew it was broken, he didn't want a cast on his foot. Casts, he informed me, were not authentic.

Quite a few of the reenactors felt compelled to discuss Civil War amputations with me. I really didn't want to hear the gruesome details that they were sharing, but not wanting to appear rude, I listened. One man proudly declared that he will become an amputee during the Battle of Antietam. I really didn't know how to respond to this, so I just smiled and suggested he read www.amputeemommy.com should he need help adjusting. 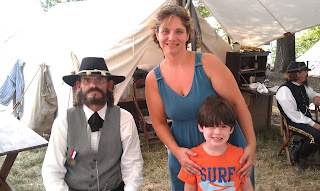 I still don't understand the desire to reenact the Civil War, but I respect that these individuals obviously love what they are doing. Only a strong passion would drive somebody to wear 20 pounds of wool in 100+ degree weather while refusing medical care for a broken foot all in the name of remaining authentic to time period. Obviously I lack that level of commitment, but I'm glad that we had the experience (and Mr. Bill sold a lot of cannon balls!)