I woke up yesterday with every intention of spending one of our final days of summer vacation at the pool. In my mind I had envisioned a fabulous picnic lunch followed by hours of splashing and playing in the cool water. Unfortunately, the weather did not cooperate with my vision, providing dreary skies and cold rain.

Robby was content watching Scooby Doo all morning, but I quickly grew restless. This is his final week of vacation, and I wanted to do something. Anything would be better than watching the teenagers chase yet another ghost, only to uncover that it was really a man with elaborate make-up in the final minutes of the show. Don't get me wrong I have nothing against the Mystery Gang, but six episodes is my limit! I was going stir crazy and needed to get out of the house.

Wanting to do something fun but lacking the energy to embark on anything too complicated, I finally decided that we should go out for lunch. Robby has been bugging us to go to the Olive Garden ever since he saw the advertisement for the "never ending pasta bowl." He jumped off the couch and dressed himself in record time when I revealed our plans. Who would have thought that going to Olive Garden would produce such excitement? 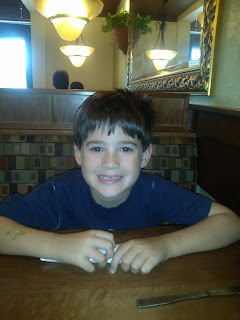 I could not have asked for a more handsome lunch date! He ordered the unlimited pasta by himself, telling the waitress that he "had a man's appetite, so he hoped that she had a lot of bowls because he was going to eat a lot."  The waitress chuckled and obviously did not take him seriously. When she brought out his third serving, I think it occurred to her that he wasn't joking!

My little pasta monster and I spent nearly two hours at Olive Garden, eating and talking. Much of the conversation revolved around his new school and the adventures that he was going to have this year. Although it wasn't a terribly active day, I thoroughly enjoyed just sitting and chatting with Robby.

I realize that in a few years sitting and chatting with me will be a rarity, so I plan on taking full advantage of the opportunity when it arises. We sat, ate and laughed in our little booth at the Olive Garden. The Summer of Awesome might be coming to a close, but plans for the Fantastically Fun Fall are already in the works!