Yesterday was my eight year anniversary of my amputation, a date that has been dubbed my Ampu-versary. The date is always bittersweet for me. I try to embrace the day as an opportunity to reflect on how far I have come. Yet, despite my efforts to remain upbeat. my mind often travels back to the day I had my amputation.

I was visiting my Mom in preparation for our family picnic. Yesterday morning I was lying in bed, not wanting to face the day. Although I was trying to remember the positive in my life, at that moment I was missing my foot.

Thankfully the ampu-versary blues were quickly lifted away as the smell of blueberry muffins wafted into my bedroom. Knowing that could be an emotionally draining day, my Mom and Robby got up early to make me muffins. It is impossible for me to feel down when the cutest five year old in the world proudly handed me a warm blueberry muffin that he baked for his "best buddy."

My day was spent in full picnic preparation mode until the guests arrived. At that point I slipped into my swimsuit and prepared for water games with the kids. This Momom/Aunt/Cousin may only have one leg, but I should never be under estimated in a watergun and water balloon battle!

While many of my cousins and family members refused to venture into the water war zone, I fully embraced the battle. I, along with the kids, was fully drenched from the battle. We started with teams, but the kids quickly became confused and simply started throwing balloons and shooting water guns at anything that moved. I learned that it is impossible to run in a swim leg, hence I got hit with a lot of water balloons. After two hours, and over 300 water balloons, a cease fire was called-- the kids wanted more ice cream cake. 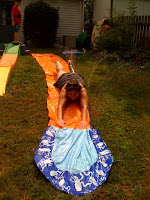 Between the water fights and the Slip n' Slide, I didn't have time to 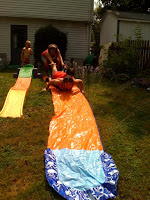 reflect on my ampu-versary. I was too busy playing and having fun with all of the kids!

Each year my ampu-versary is becoming easier. I didn't cry and, aside from my morning funk, I didn't feel sad. I am proud of how far I have come in eight years. The absence of constant pain has been liberating. I never envisioned that my life would be so fulfilling and happy after I became an amputee.

Would I rather have my natural uninjured foot? Of course I would, but not if that meant giving up everything that I have accomplished since becoming an amputee. My limb loss has set my life on a different path. I must admit that I am thoroughly enjoying the adventure!
at 4:07 AM