Yesterday was a whirlwind of activity and emotion. I was honored to walk in memory of my friend Vashni who lost her battle with cervical cancer on Wednesday. The walk, which began as a way for us to rally around our friend during her treatment, became a vehicle for us to mourn and to celebrate her life. It was a surreal experience.

The day had numerous poignant moments. Perhaps one of the most inspired was provided by Vashni's friend Jo, who traveled to Washington, DC from Pittsburgh by bus early Sunday morning. Despite being fatigued from the long trip, she changed into her running shorts and began to stretch. Before the race gun fired, she looked at us and vowed that she was going to win for Vashni. She took off at a full sprint, impressive for any age but astounding considering that she is nearly 40!

We commenced our walk while names of friends and family who have battled cancer were proudly read. I held a sign for Vashni as we walked the streets of DC. Every once in awhile I felt tears welling as I became overwhelmed by emotion. I tried to push all thoughts out of my mind and concentrated on walking.

Our group finished the walk just as the first runners were making the final turn towards the finish. As if we were in a scene out of a Lifetime movie, there was Jo, true to her word. She was flying down the streets, leaving females half her age in her wake. She finished the race first in her age classification, slightly behind a military lad who was young enough to be her child! Without hesitation, Jo gave her prize to Vashni's husband before hopping on the bus back to Pittsburgh.

I felt like I was in a daze for much of the walk, thinking about how cancer journeys are varied and unique. The same diagnosis can be given to two people with every similarity yet the outcome can be totally opposite.  I suppose I am dealing with a slight case of survivor's guilt. I can't help but wonder why I am still here when my friend was robbed of her life. I know I'll never have those answers and that wallowing in the question will only lead to heartache and frustration. I owe it to everybody who lost their battle to live my life as fully as possible. 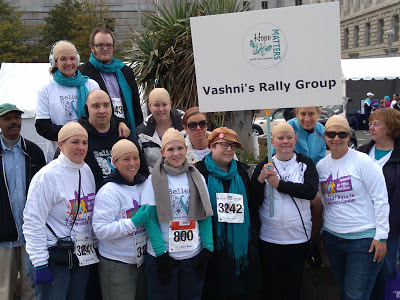