To my shock and dismay, Robby actually enjoys his Cotillion classes. I envisioned having to pry him away from his computer, wrangle him into his suit and forcibly contain him in the car before each class. It turns out that he has the dates marked on his calendar and it is something that he eagerly anticipates each month. I've never been so happy to be so wrong about my child!

Yesterday was Robby's holiday Cotillion dance, an event that he has been looking forward to since September. He was fidgety and nervous all day, worrying about stepping on a girls feet and spilling punch on her white gloves. I knew that he was going to be fine, but Momom reassurances hold little weight these days. By the time he was ready to go, he was so jittery that I would have sworn he had consumed a pot of coffee.

When I saw him in his suit I was taken aback. My little Koopa looked so mature and grown up. I was excited about his experiencing his first dance, but saddened that my little buddy was all grown up and doing things on his own. I know that is the goal of parenting, but it is still painful when it happens.  While I wanted to coax him back into footy pajamas, curl up on the couch and watch Snoopy Christmas, I gave him a kiss goodbye and encouraged him to be nice and have fun.

Scott volunteers at the Cotillion class (gentlemen volunteers were specifically requested) so he was able to accompany Robby to the dance. While he wasn't allowed inside the ballroom, he did manage to sneak a few photos. I was somewhat relieved to see that all of the boys and girls had the same deer caught in the headlights stunned look on their faces. On the verge of becoming a teen, in some ways he is still a little boy. 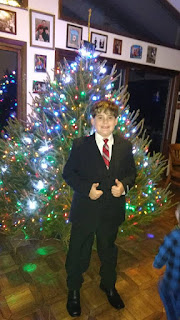