I have always felt passionately about politics, but I would never consider myself to be politically involved. I vote in every election and have on a few occasions put out a yard sign for specific candidates. Other than those minimal efforts, I have stayed out of the political arena.

As I approach middle age, I find myself delving into political activism. With the repeal of the Affordable Care Act (ACA) imminent, I feel obligated to lend my voice to the collective outrage. With a replacement plan promised but never detailed, the classification of prosthetic devices as Essential Health Benefits (EHB) is in peril. Without the EHB classification, amputees will face unrealistic lifetime and yearly benefit caps. We will return to the pre-ACA reality where mobility and prosthetic devices were luxuries for the affluent. The other two million amputees living in this country will become more disabled by their financial means and insurance coverage than by the loss of their limb.

Last week I joined the hundreds of thousands of other civically driven protestors on the streets of Washington DC for the Women's March. I was fortunate to be supported by a handful of strong women who also believe in keeping prosthetic devices available to every amputee who has  both the desire and the ability to utilize them.  With my newly printed signs, I stepped out of my comfort zone and onto the streets in protest.

The experience at the march was surreal. I felt strengthened and empowered by the numbers of the determined people who took part in the effort.  I held my "Maintain Essential Health Benefits" sign over my head as I represented my niche issue with strength and pride. I left the march feeling uplifted, unstoppable and determined to utilize my newly discovered voice.

Sunday morning I woke up and logged onto Facebook, eager to read the comments from my photos and to see updates from my fellow activist friends. My feelings of empowerment and strength quickly dissolved into self-doubt and embarrassment when I realized that a trolls had come out to play the night before and turned my photo into a "mean meme."

The meme, reading "Trump got more fat women marching in 1 day than Michel Obama did in 8 years."  Seeing my photo hijacked for such a misogynistic, hurtful sentiment was humiliating. The fact that the troll who created the meme had failed to correct his spelling and grammar errors before posting was irrelevant. I felt belittled, disgraced and irrelevant.

After a few hours of wallowing, I decided to channel the strength I had discovered a few hours earlier. The purpose of the meme was to belittle and silence the protestors. Once I made that realization, I vowed to remain undeterred from my goal. I was marching for everybody who needs, or who will need, a prosthetic device.  Instead of being a victim, I opted to take back my power by sharing the meme.

Words, such as those written on the meme, can hurt. But I also discovered that words of support and love can also heal. By publishing the meme I reclaimed ownership and reestablished my voice. In many ways the photo has become even more special. Not only does it capture an amazing day, but it also epitomizes my finding my inner activist. I was never a mean meme before and this experience has added to my sense of empowerment. 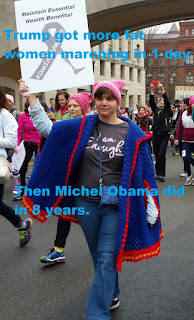