Robby was on Cloud 9 after his classes on Friday. He loved being with his friends and to again in in the throws of his role playing games. I have to admit that I don't fully understand the rules and intricacies of his games. When he starts to tell me about the rolls of the dice and the various "stealth" ratings, I find myself zoning out. But I do know that he loves it, so as long as he understands its a good thing.

This past weekend was cold but uneventful in terms of weather. We were hoping for snow, but it seems that we are again going to be missed. So, instead of playing in the snow Timmy and I were playing in the woods and on his obstacle course. My goodness I wish I had his energy.

Both boys successfully completed their semester courses. This week we start semester two of kindergarten and 9th grade. I wish that we had time for a break between semesters, but it didn't work out this year. Hopefully the courses will ease back into academics so that nobody (especially me) ends up feeling frazzled and overwhelmed. 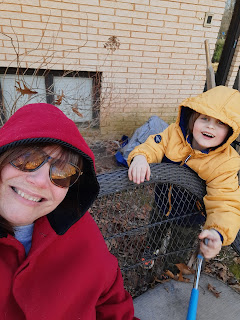