More than anything else, Robby wanted a meteorite detector for his birthday. He is enthralled with outer space and all things astronomy related. His favorite television show is Meteorite Men, a show about two middle aged men who scour the landscape in search of the coveted meteorite, while uncovering a lot of "meteor-wrongs" in the process.

After researching this odd gift request, I discovered that a simple metal detector will suffice for a novice meteorite hunter. I ordered the detector with a satisfaction of knowing that my little guy was going to be thrilled. As soon as he tore the wrapping on his gift I knew that I had hit a home run. He began screaming, "It's just what I've always wanted" while jumping up and down. It was a moment that I wish I had my video camera running!

After we assembled his detector, Robby immediately went to work in our yard. Our neighbor, Mr. Bill, saw us and came over to wish Robby a happy birthday. My little metal/ meteorite hunter couldn't wait to show Mr. Bill his prized gift as he yammered about finding the "Tuscon ring" along with meteorites and perhaps a few diamonds.

Yesterday morning I spent cleaning the upstairs of my house. Robby went hunting in the yard but returned about 30 minutes later, deflated. He didn't find anything. I felt bad for him--a metal detector isn't a lot of fun unless you find something.

Last night, after the heat finally broke (a little), Robby and I went out to hunt for meteorites. Mr. Bill saw us and casually invited us to look in his back yard. Robby was elated and went sprinting over, metal detector waving wildly as he ran.

After a deep discussion, Mr. Bill and Robby decided that the best place to begin hunting is in the mole tunnels. Mr. Bill explained that the moles dig up the meteorites when they burrow, which makes them easier to detect and less work to dig up. Robby, understanding his logic, began searching all of the mole holes in Mr. Bill's back yard.

After about 90 seconds I heard a squeal of delight. Robby's metal detector was beeping, and it wasn't because it was too close to Momom's leg! He found something. He began to dig and... he found a meteorite! 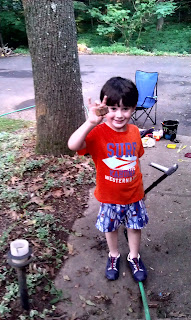 Robby was so excited when he unearthed his treasure that he immediately pulled down his pants and peed on the closest tree. He jumped up and down and kept repeating "I can't believe I found a real meteorite that came from outer space and crashed into the planet Earth." Mr. Bill told him to keep looking, and low and behold he found another!

It turns out that during the afternoon heat, Mr. Bill planted remnants of cannon balls from the civil war throughout his yard. He wanted Robby to be successful in his quest and is hopeful that metal detecting will become a hobby for him. (It turns out that Mr. Bill has an impressive collection of Civil War artifacts that he discovered while metal detecting.)

Who knows, maybe the two of them will go hunting for treasure some time. With them working together, I have no doubt that they will find a real meteorite (although I would prefer a diamond or two). I do know that Robby will never forget finding his first meteorite--which he slept with last night
at 5:03 AM