Last night was a big night in our house.  After months of practicing, Robby went for his Tae Kwon Do gold belt. To say that he was petrified would be an understatement. Despite hours of preparation, he was terrified when his time came for the exam.

Even though I had full confidence in his success, I have to admit that I was nervous watching him on the mat. He looked so scared and timid. I wanted to run out and hug him, but I knew that he needed to go solo.

After a shaky start, he calmed down and nailed the exam. We now have a proud gold belt in our household. Robby was beaming all night, proudly calling everybody he thought might care on our drive home.  I don't think that his Tae Kwon Do classes have improved his self-defense skills, but I must say that it has done wonders for his confidence. 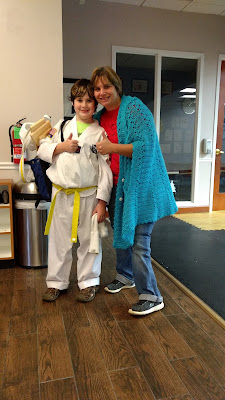 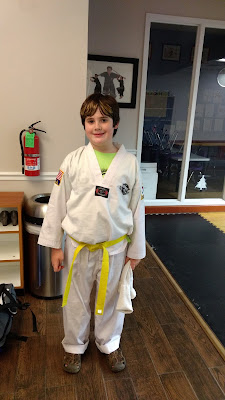