Hello from our vacation!

True to his schedule, Timmy woke up early and was raring to go. After distracting him with cartoons and a doughnut until Robby and Scott were awake, we dressed and headed to the beach. I felt a bit like the odd man out. The boys loved the sand and the surf and were carefree and happy. I spent the majority of my time struggling to walk comfortable on the soft sand and maintain my balance in the waves. There is no other way around it;  wearing a prosthetic at the beach stinks!

After two hours I was able to convince Timmy to leave the beach for a quick swim in the pool. Again I struggled walking across the sand, only this time it was worse because I was also contending with an extremely heavy prosthesis. While I was in the ocean and playing on the beach, sand had filled and packed  in my foot shell. I venture to guess that my leg was at least 1-2 pounds heavier because of the makeshift foot shell cement. (Trust me, a pound or two doesn't sound like a lot until it is strapped to the bottom of your limb.) I was relieved to have the sand float out of my foot shell in the pool.

Robby and Scott went deep sea fishing in the afternoon while Timmy and I repeated our beach and pool pattern. The fishermen had a great time, and came home with enthusiastic stories of huge catches and wonderful sea adventures.  (The highlight was Robby reeling in an imposing fish. He was delighted and quickly named his prized catch Steve. Apparently he was taken aback when the deckhand beheaded Steve and threw him into the "keep" pile.)
Timmy had a fun, albeit calmer, day and was sound asleep by 6. The boys returned to the ocean for an evening swim, leaving me in the room with a sleeping toddler. I took advantage of the downtime by enjoying a Jacuzzi bath without interruption!

Today we are going on a pirate boat, which should be fun.  Stay tuned for more vacation adventures! 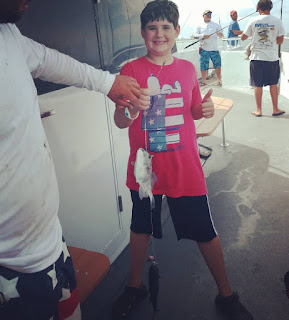